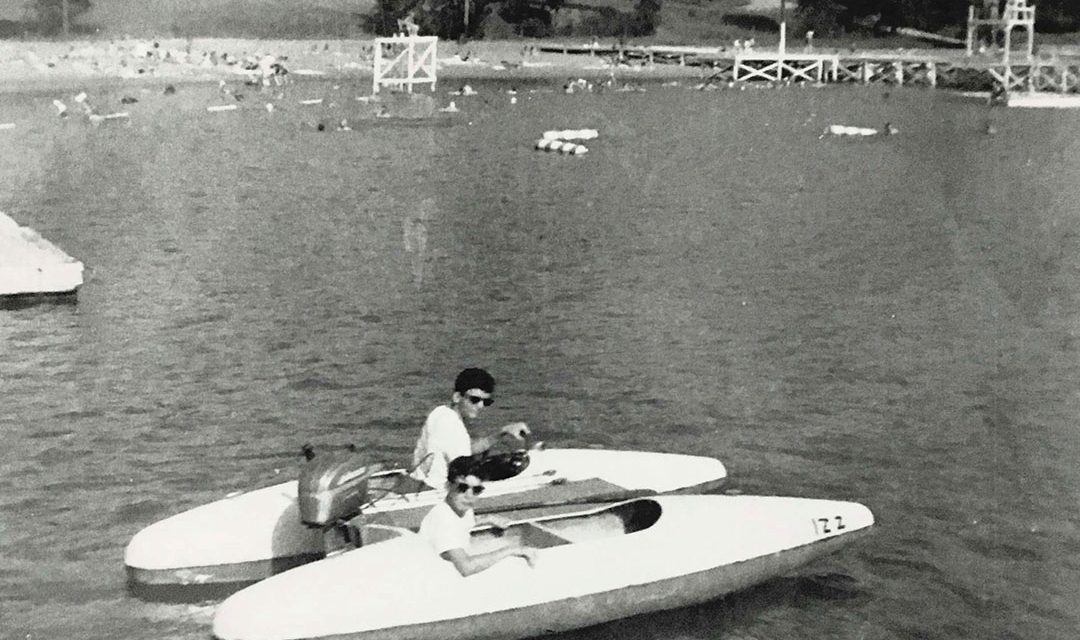 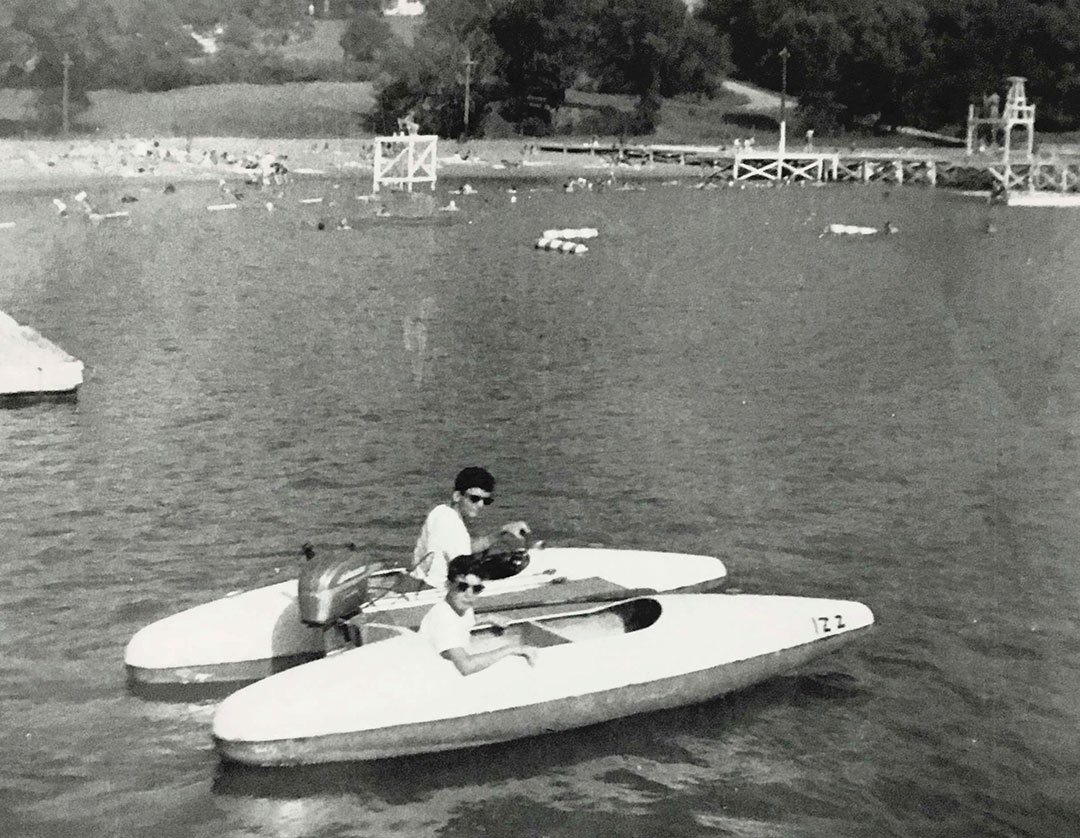 The author and his younger brother, Robert, exploring aboard in 1956.

In 1950, a friend of mine paid $7.00 for one half of a surplus aircraft wingtip fuel tank, made of aluminum. He added a keel to it, lost interest in the project, and sold the fuel tank boat to me for $8.00. I was 11 years old and this was the start of my nautical life, growing up near Bar Beach, Roslyn Harbor, Long Island, New York.

The boat was 11 feet 4 inches long, 21 inches wide, semi-circular in cross section, and very unstable. I added a couple of 2 X 2-inch boards and a carpet pole as an outrigger to add stability. My modification didn’t add much stability, but I used the boat this way for a while, with canoe paddles, no more than two people aboard. We never ventured far from shore because even the wake of a passing boat would have swamped and sunk my craft.

What I really needed was the other half of the tank, to act as a deck, but I had no luck finding it. With only three people riding in my boat, she had about 3 inches of freeboard. I needed to do something.

My father, who was an inventor and highly regarded person in the burgeoning plastics industry, suggested we make a wire mesh reinforced plaster mold of the aluminum hull and then make another half-tank using glass-reinforced polyester. It turned out to be so much work making the mold, that he decided we should instead make four fiberglass shells, attach them top-to-bottom, and build a catamaran. It was 1952.

Each tank hull featured two molded seats, and the hulls were connected by a deck about 4 feet long and 42 inches wide. The deck had a plywood-and-aluminum pipe frame and a transom on the back. There was a watertight compartment in each hull. We mated a 15-horsepower Evinrude to the transom and made snap-on canvas covers for the cockpits when the boat was not in use. This was the dawn of the jet age and there was nothing else like it on the water, high style.

The shape of the hulls was attractive and great for aerodynamics, not so great for a power catamaran used on the water surface. Because it made sense to do so, we oriented the hulls to point in the opposite direction as they would have pointed used as tanks on an airplane. One deficiency of my boat was that she couldn’t get up on a plane (pardon the pun). To do so, the aft ends of the tank hulls would need to have been squared off on their bottoms. Her other deficiency was steerage in reverse. Because the outboard was mounted near the center and did not have counter-rotating propellers, the prop walk was horrific. But none of that got in the way of fun. We occasionally voyaged out into the Long Island Sound from Roslyn Harbor.

In 1954, Hurricane Carol ravaged the US East Coast. My cat was anchored at the Sea Cliff Yacht Club on Mosquito Cove, swinging on a mushroom anchor. In those days, there was little warning of a big storm coming and my cat was there on the hook August 31 when peak winds blew 115 mph. The eye of the hurricane passed directly overhead, so Mosquito Cove got the brunt of it from two opposite directions.

After the weather cleared, we went to the yacht club. There were approximately 100 sailboat masts sticking out of the water and no boats of any type left floating, except one. I imagine she flew a few feet above the water tethered to her rode, perfectly suited to the high winds.

The next year, my parents moved the family from New York to Kansas. For the next five years, I explored and fished every inch of Lake Quivira from my power cat. In 1960, when my family moved again, to Pennsylvania, they insisted we sell the boat first. We kept the outboard and let her go for $50. But no regrets, the boat did its job, made me a life-long boater.

Ronald Sundelin currently lives in Yorktown, Virginia, and keeps a 1985 30-foot Sea Ray Sundancer on a boat lift in the tidal creek behind his house. He would love to know if anyone has any knowledge of the whereabouts of his first boat (and if you do, send an email to michael_r@goodoldboat.com).

Navigation Through the Ages: Book Review