Dress Up the Steering Wheel 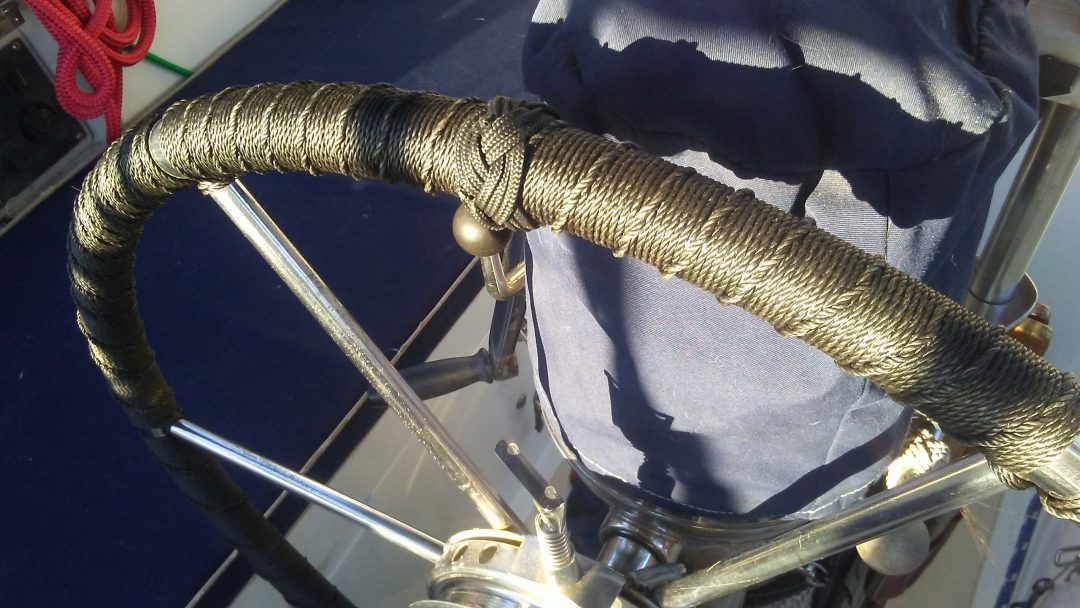 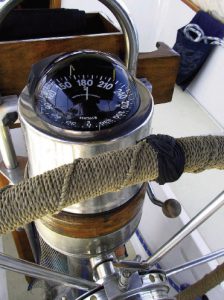 Carina’s tarred-twine wheel wrap has interesting color and texture, at top. It replaced an earlier wrap made from island-spun coconut twine which lasted for years.

When a stainless steel steering wheel gets wet or, worse yet, wet and cold, it becomes difficult to grip and will quickly suck the life out of a sailor’s hands. This isn’t simply uncomfortable; it can be a safety concern. Accordingly, many sailors cover their stainless steel steering wheels, usually with leather. When we originally outfitted our Mason 33, Carina, we purchased a leather wheel-wrap kit that only required we lace it on with twine. When this cover eventually degraded from exposure to sun and salt air, we balked at the price of a replacement cover. Seeking an alternative, we remembered the lovely lashings on the tiller of our previous boat, Aria, and decided to wrap our wheel in a simple yet elegant French spiral hitching (also called French whipping).

The first time we did this, we used coconut twine handmade on Lamotrek Atoll in the Pacific. When, after many years, it began to degrade, we replaced it with #30 Tarred Nylon Seine Twine from Seattle Marine and Fishing Supply. Seine twine is sold by the pound; a pound of #30 is approximately 625 feet long and costs $15. Carina’s wheel is 26 inches in diameter, its rim is 1-inch tubing, and wrapping it in a French spiral hitch required approximately half a pound, or about 350 feet. Tarred twine sounds primitive, but it brings benefits: in addition to its sheer lustrous black beauty, the twine is strong, abrasion-resistant, and hydrophobic, meaning it does not absorb water. Tarring also creates friction, which helps to set the knots firmly and neatly.

How to whip a wheel 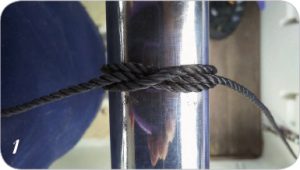 Before starting, polish the wheel to remove any salt that would be trapped under the lashings and cause corrosion. Then mark the top of the wheel when the rudder is in its neutral, fore-and-aft, position. This is the most logical place to begin covering the wheel because, when you’ve completed the spiral hitching, you can hide the meeting point under a Turk’s-head knot or other device to indicate “top dead center.” 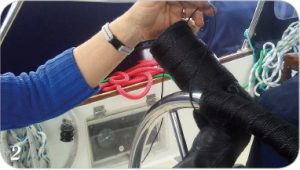 Put on gloves to avoid getting blisters from the repetitive knot-tying process, then begin the spiral hitching by tying a constrictor knot and setting it firmly (photo 1). When you’re working from the helmsman’s seat, the skein of twine should be aft, toward you, and the bitter end forward, away from you. Leave a few inches of bitter end that can be trimmed late. 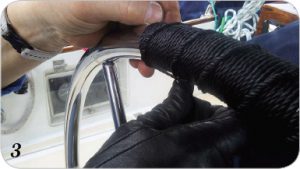 Working counterclockwise, pass the skein through the wheel, up and around and back down through the loop of twine, forming a half hitch against the edge of the constrictor knot. Repeat this process to make subsequent hitches (photo 2). Tighten the half hitches firmly by pulling the standing part downward (photo 3). Pulling the standing part snugly in the opposite direction will form a larger knot and a longer spiral. Whichever method you choose, be consistent in the direction and tension used so that the pattern of spirals on the wheel is uniform. (A marlinspike or slotted screwdriver is handy for setting the hitch against the knot and setting sequential hitches against each other.) 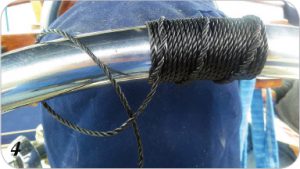 As you repeatedly form half hitches, setting them firmly and aligning them, you will quickly see the spiral pattern emerge (photo 4). 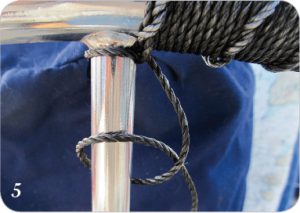 When you reach a spoke, form two half hitches on the spoke with the standing part exiting the knot away from you (photo 5), then resume making hitches on the wheel (photo 6). 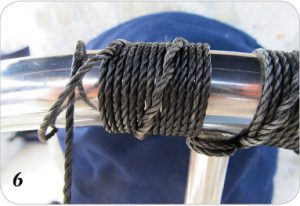 Continue around the wheel until you reach the neutral rudder position and your original constrictor knot. Bring the last hitches tight up to and against the constrictor knot and set the knot hard. To finish, and secure the end of the twine, trim the end to about 1⁄16 inch and briefly burn it before squashing it flat, a process called riveting. Rivet the bitter end at the constrictor knot as well. 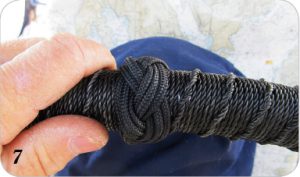 For our Turk’s head, we used flat nylon purse-seine repair line because we had it on board, but round twine would have been preferable. We began this knot loosely and made three rounds before tightening. Whatever line you choose, it should be of a sufficient diameter to create a convex knot, so that when steering, the neutral rudder position is obvious to the touch. This is a great help in the dark or when you are intent on looking ahead in tight quarters.

Our French spiral hitch wrap is an economical and highly- effective solution that will provide years of service while looking magnificent all its life.

Leslie Linkkila and Philip DiNuovo became entranced with cruising in 1991, and in 2003 quit their careers and left the Pacific Northwest to cruise the South Pacific in their Mason 33, Carina. They closed the circle on their Pacific wanderings at Port Townsend, Washington, in 2017 after logging more than 41,000 nautical miles. They hope to mentor and inspire others in pursuing their own bluewater adventures.

Want to try your own hand at knotwork aboard? Good Old Boat contributor Gregg Bruff recommends the following books as excellent references.

For instant help tying a constrictor knot or aTurk’s-head knot, do a web search. Several sites will pop up. Here are three: 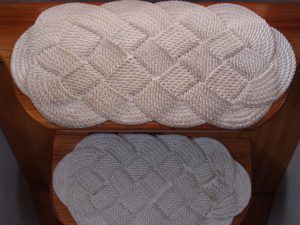 Knotwork at Work on Board –Editors

Good Old Boat readers use knotwork on board for practical and decorative purposes.

Brandon and Virginia Ford glued rope mats onto the companionway steps of Oceanus, their 1971 Columbia 43. “The weave is called Sailor’sTrue Lover Mat and we got the idea from Hervey Garrett Smith’s book, The Marlinspike Sailor. Virginia and a Samoan friend wove them three years ago from 5⁄16-inch nylon rope, which looks better with age. Nylon is tough and abrasion resistant, and we affixed the mats using adhesive caulk.They provide great traction and feel good when we step on them with bare feet.” 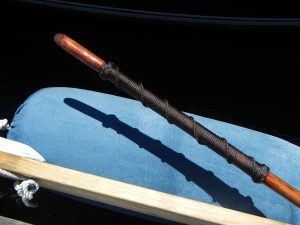 Gregg Bruff sent us this photo of a weave he did on his pike pole. “I’ve used a flimsy aluminum boathook since we bought Arcturus and always wanted a robust pike pole I could use for a variety of purposes, including fending off if I had to. I found a metal tip on eBay, bought a $9 pine pole, and added this knotwork recently. A couple of coats of LeTonkinois and it’s well on the way to being useful this season.” 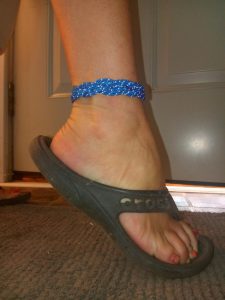 Gary Bratton didn’t send us a photo of knotwork on his boat, not exactly, but he insists that his wife, Jodi, is always aboard when he is, so this qualifies. “We were in the Bahamas when Jodi met a girl wearing aTurk’s head as an anklet. She wanted one. After trying several different ropes, we found that a reflective para-cord was perfect.”

Leslie Linkkila and Philip DiNuovo became entranced with cruising in 1991, and in 2003 quit their careers and left the Pacific Northwest to cruise the South Pacific in their Mason 33, Carina. They closed the circle on their Pacific wanderings at Port Townsend, Washington, in 2017 after logging more than 41,000 nautical miles. They hope to mentor and inspire others in pursuing their own bluewater adventures. 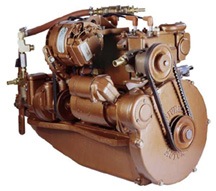 Atomic 4: Smooth, worth another look