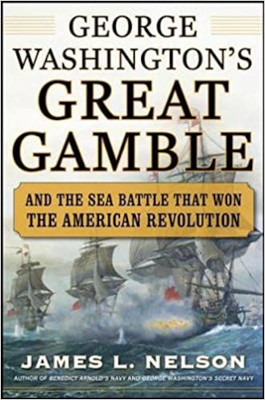 There are those who to this day insist that the United States was born by an act of divine intervention. How else, such people argue, could a ragtag band of farmers, silversmiths and shopkeepers prevail against the mightiest military the world had ever known?

A compelling view to such speculation is provided by James L. Nelson’s well-researched account of the final months of the American Revolution, a time when rebel enthusiasm for the Glorious Cause was clearly on the wane. America desperately needed a victory on land, and she desperately needed French control of the sea to ensure that victory.

Unsuccessful in its campaigns in the North, in 1780 the British High Command settled on a “southern strategy.” At the core of this strategy lay the assumption that living in Georgia and the Carolinas were legions of Tories loyal to King George who would flock to his banner if offered the opportunity. Once Lord Charles Cornwallis had subdued the Carolinas, he could march north, conquer Virginia, and restore the entire South to the British Empire.

However, as Mr. Nelson points out with an intriguing blend of cutting edge analysis and commentary sprinkled with a delightful dose of dry wit, there were several problems with this strategy. First, while there may have been numerous Tories living in the South, precious few of them were willing to spill their blood for the British king. And second, Cornwallis’s superior, Sir Henry Clinton, was in New York, many miles away, and the two generals had little use for each other. Both wrote to American Secretary Germaine in London rather than to each other, and Germaine’s views of the war were almost child-like in their naivete and optimism.

After a series of battles in the Carolinas produced no conclusive outcomes, Cornwallis finally marched north into Virginia. There, a perilous game of chess was being played between British and American forces, each side jockeying for position between the Virginia capes and the capital of Richmond. Meanwhile, in Rhode Island, le Comte de Rochambeau had landed in Newport with a French army and le Comte de Barras had sailed in with a fleet of battle cruisers. From the West Indies le Comte de Grasse wrote General Washington that he would be sailing with a far greater naval force for the Chesapeake, where he would remain until the end of hurricane season.

As Mr. Nelson writes, “Finally the stars were beginning to align to make a decisive victory possible.” Washington, who had long favored a siege of New York, now suddenly changed strategy and ordered his ragged Continentals and the superbly uniformed French army on a forced march to the Chesapeake.

What happened next was a checkmate for the ages. Cornwallis’s army was defeated at Yorktown, but it was a victory made possible by yet another shocking wave of British blunders in an epic sea battle fought between de Grasse and Adm. Sir Thomas Graves.

The benevolence of a divine providence? You decide, but not until you have read this gripping and superbly written account of the facts at hand.