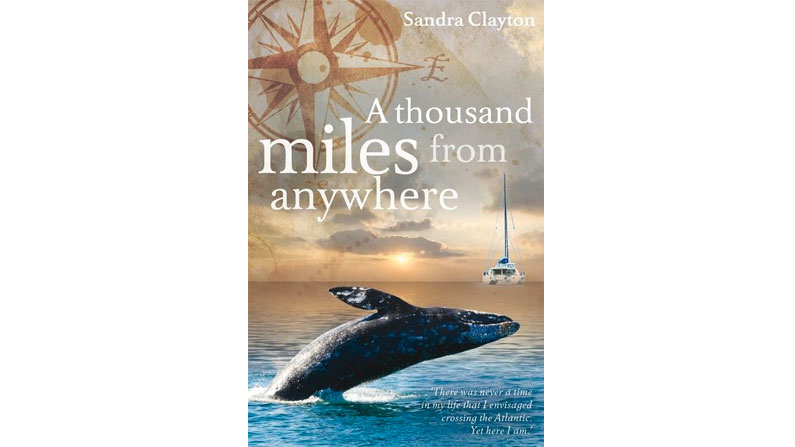 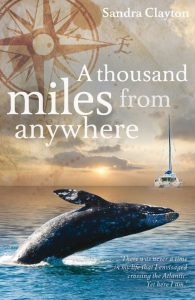 A Thousand Miles From Anywhere is Sandra Clayton’s third book chronicling her passages with her husband David aboard Voyager, a cruising catamaran built by Solaris Yachts.

The author provides readers with an extremely detailed and exceptionally imaginative visual account of crossing the Atlantic, sailing the Madeira Islands, the Canary Islands, and the Caribbean before finally reaching the southeastern coast of North America (Florida).

Readers see everything through her viewpoint, and feel, smell, taste, and hear the details of the journey as though they are along for the ride.

“Madeira . . . Its coastline is striking as you approach because the island is a volcano. . . Fora, the large rock at its eastern corner, with St Laurence’s lighthouse perched on it, rises steeply to a point. This white lighthouse gives every appearance of having been iced onto the top, like a bride on a wedding cake, with the white icing running downhill to cover . . . the tiny summit.”

At times readers will imagine that they are reading straight from Clayton’s log book, and that they are on the journey with the Claytons, right there in the cockpit, onboard Voyager.

Weathering gale winds and planning around the Atlantic hurricane season is another concern for the Claytons and much planning is required. Sometimes, no matter how prepared they are, communication quandaries throw a monkey wrench into their plans to sightsee.

The Claytons experience numerous encounters with creatures of the sea.

“When David wakes me . . . for my second watch of the night, he says that as he left the cockpit he could hear a whale breathing.”

Clayton explains to readers that this is very troubling because if you can hear a whale breathing, they are very close, on top of the water, and possibly asleep! What if the whale wakes up and rams the boat? She explains that this is just another one of many possibilities cruisers encounter while crossing the open ocean at night.

Later, as they cross the Atlantic, a dark gray 25-foot male Minke whale “visits” Voyager and her crew bodysurfing, rolling onto his back and then swimming under the catamaran. Again and again he repeats his “dance,” as Clayton writes, “having a whale of a time.”

Included in the book are charts of the journey, information on the Beaufort Wind Force Scale and a glossary of terms for non-sailors. These additions make A Thousand Miles From Anywhere an appealing read for sailors, armchair sailors, and novices.

Chesapeake Sails, A History of Yachting on the Bay: Book Review