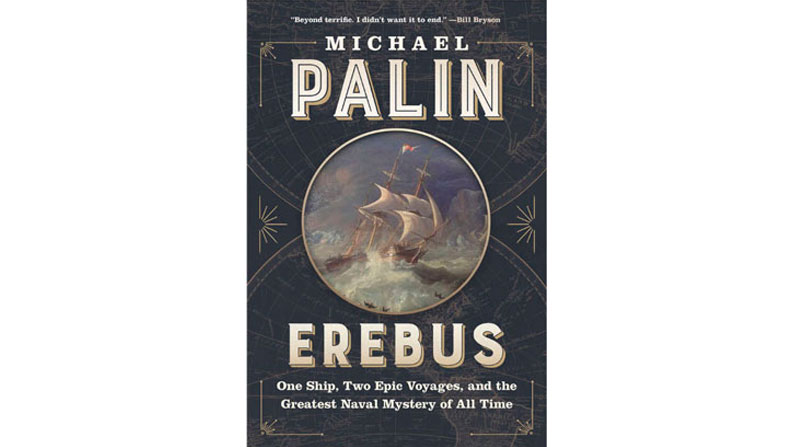 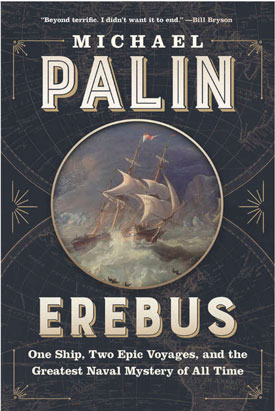 Most of us know Michael Palin from his days with Monty Python’s Flying Circus, but he has also produced several superb BBC travel documentaries. It was probably his fame from the former and involvement in the latter that led to his becoming President of the Royal Geographical Society, and then being asked to address the Athenaeum Club in London, being required to tell the story of one of their past members. Palin chose the renowned 19th Century British botanist Joseph Hooker (whose story Palin had first encountered during filming of one of his travel documentaries in Brazil).

It was Hooker who exported the first rubber plants out of Brazil to England, and then to parts of the British Empire, creating a flourishing British rubber industry (and in the process destroying Brazil’s). However, it was one tidbit of Hooker’s early career that caught Palin’s attention.

At 20 years of age, Hooker was the botanist on James Clark Ross’ four-year expedition to Antarctica in the early 1840s to discover the South Magnetic Pole. The vessel that was Ross and Hooker’s home for those four years and three voyages to Antarctica was the converted bomb ketch HMS Erebus. Erebus sailed in company with the slightly smaller HMS Terror, also a converted bomb ketch. The Antarctic Ross Ice Shelf and Ross Sea are named after Ross, and they named the active volcano discovered on their first voyage Mount Erebus, all of which had been recorded in Hooker’s journals from those voyages. So, in 2014 when Palin heard Canadian Prime Minister Stephen Harper announce that the wreck of the Erebus had been discovered in the Canadian Arctic, he set out to tell the story of this remarkable vessel and the men who sailed in her.

Erebus is now inextricably linked to the doomed Franklin Expedition which set out in 1845 in search of the final link in the Northwest Passage. She and Terror were chosen for that mission because of their remarkable performance and survival on the Antarctic expedition. Indeed, James Clark Ross was asked to lead this next mission. Certainly, he was the most qualified, with his many years in the Arctic prior to the Antarctic voyages, but Ross felt he had done enough and was now ready to settle down into married life ashore. Under the aggressive lobbying of Lady Jane Franklin, Ross recommended his old friend John Franklin to lead this new voyage.

Franklin also had Arctic experience in what is now Canada, having in the 1820s led two overland expeditions to survey rivers flowing into the Arctic Ocean. The first of these expeditions almost cost him his life, forcing him to eat his boots to stave off starvation. (This remarkable story is told in Adam Shoalts’ excellent book on Arctic exploration entitled A History of Canada in Ten Maps). Franklin, in fact, was not the obvious choice to command this mission. Fifty nine years old and recently returned from an unsuccessful tour as governor of Tasmania, he had not had a naval command for 12 years. But with pressure from the inexhaustible Lady Jane Franklin and the recommendation of Ross, and the rush to get the expedition under way, the Admiralty put Franklin in command.

This is the story of a ship, so begins with her building and her place in a Royal Navy looking for new roles after the end of the Napoleonic Wars, during this period of Pax Britannica. The new role was exploration, especially of the inaccessible Polar regions that included a study of the earth’s magnetism. Being a bomb ketch (although ship rigged) she was already sturdily built to withstand the recoil of her large mortars but was further strengthened to withstand the crushing pressure of ice. Keep in mind, these were still sailing ships. It wasn’t until she was being prepared for the Franklin Expedition that she had a 25-horsepower steam engine and retractable screw propeller installed. (My Atomic 4 has more than 25 horsepower.)

Her Antarctic voyages under the command of Ross are well documented by diaries and journals and occupy about two thirds of the book. However, her story after she enters the Arctic under Franklin’s command is less known. At this point in history, the story of Erebus and her crew is conjecture, pieced together by the meager discoveries made by the myriad of rescue missions sent out to find the lost expedition. Indeed, it was these search missions that largely mapped the Arctic. There are no journals yet found of that fatal three years frozen in Arctic ice during a period of exceptional cold that the Inuit remember as the “years without summer”. Palin compares the adoration heaped upon Franklin for his failed attempt at the Northwest Passage to the similar adoration for Robert Scott in his unsuccessful and equally fatal race to the South Pole. Palin then points out that it was Norwegian Roald Amundsen who not only beat Scott to the South Pole but was also the first person to successfully navigate the Northwest Passage, despite the efforts of Lady Franklin to have her husband immortalized in that role.

Despite the expedition being a British and Royal Navy endeavor, Palin goes out of his way in the final chapters to explain that Franklin is now very much a Canadian story. He even lustily joins in a rousing chorus of Stan Rogers’ “Northwest Passage” on a Russian excursion vessel taking Franklin devotees to Ross Straight and Beechey Island to visit the few known sites of the Franklin expedition. However, appropriately perhaps, impassable ice buildup prevented them from getting down to King William Island and the Adelaide Peninsula where the Erebus and Terror now lie. As Palin and his new-found friends sing:

“Ah, for just one time I would take the Northwest Passage To find the hand of Franklin reaching for the Beaufort Sea Tracing one warm line through a land so wide and savage And make a Northwest Passage to the sea”

For anyone interested in the history of polar exploration, or anyone like me, holed up in unrelenting winter trying to imagine what those men went through for Queen and Country, this is an exceptionally good read about the ship at the center of a 175-year-old mystery.

Erebus: One Ship, Two Epic Voyages, and the Greatest Naval Mystery of All Time, by Michael Palin (Greystone Books, 2018; 352 pages)