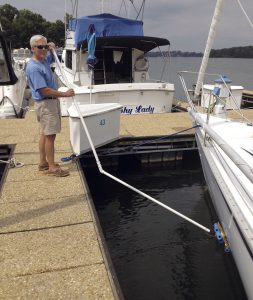 Ferman demonstrates how he can clean his boat’s bottom while she’s in her slip.

Give slime and scum the brush-off on the cheap

Doesn’t every sailor yearn for another tenth of a knot? Especially when racing? I do. Lucky are those who trailer their boats and can clean them at any time or place. Residing in a slip, Wind-Borne, my Hunter 28.5, is subject to all those nasty little organisms that are attracted to the hull. One nice thing about my location in freshwater Lake Norman, just north of Charlotte, North Carolina, is that there are no barnacles, just fuzzy scum. Even fuzzy scum slows the boat. Plus, when the boat heels, I like it to show a nice blue, not brown, underside. The scum’s got to go. My son gives me a cleaning by diver for Father’s Day each year but, as I race several times a year, I like to have a slick hull all the time.

While researching available bottom cleaning devices, I thought, “Why not have some fun designing my own?” I started out by listing criteria I wanted such a device to meet. It had to be easy to use, effective, durable, readily storable, and inexpensive.

I knew PVC pipe would work well as it’s easy to cut, configure, and join — and it’s rustproof. I found a floor sweeper with a flat swivel-head and terrycloth cover. One special need was an angle in the long handle to permit reaching under the boat’s bottom. This was accomplished with a 45-degree PVC fitting with screwed connections that disassemble for storage and transporting. (I pinned the connections so they wouldn’t unscrew at the wrong time.)

The basic parts of the hull cleaner are a swivel-head floor sweeper, PVC pipe and sundry fittings, and a pool noodle.

I assembled the parts and attached flotation to the back of the head to force it upward against the hull. The flotation is closed-cell-foam cut from swim noodle that sells for $1.99.

It was time for the first test. The device was unwieldy until I got it in the water, where its buoyancy held it up nicely. While scrubbing, I noticed that the head wanted to flop the wrong way (with the float side up). That wouldn’t do. What’s more, the cleaning-head connection swiveled the wrong way and the broom-head connection came off. Rearranging the flotation and screw-pinning some connections solved these problems.

The second test went much better. The tool slid back and forth nicely with the terry material wiping off the scuzz, which floated away in a satisfying way. 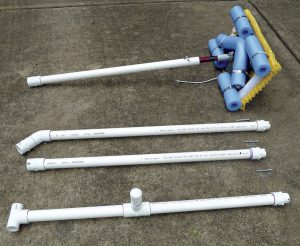 To make his hull cleaner easier to transport and store, Ferman cut the PVC pipe handle into short lengths which he joins together with screwed connections.

The underwater appendages were a different matter, as the buoyant cleaning head resisted being pushed down far enough to reach the bottom halves of the keel and rudder. To solve this, I fabricated another head with just one float located on one side to hold it vertically to match the vertical surfaces. Changing heads is a snap. I simply remove the locking pin and switch out the head and its shaft.

Further improvements included the addition of two screwed connections to make shorter pieces that can be stored easily and a steering stick to provide better leverage for guiding the device. The total cost: about $60. The most expensive parts are the two sweepers at $17 each. I could have reduced that significantly by fabricating them myself.

Recognizing that this hull-cleaning device is a prototype, I’m satisfied with how it works. I’ll continue to use it as is and will also work on ways to improve it. 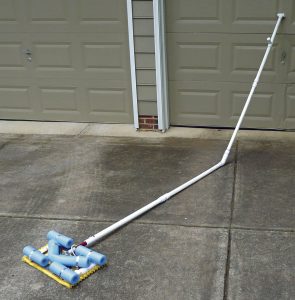 Although the assembled hull cleaner looks a little ungainly, it works! The short stub at right angles to the handle gives Ferman leverage for guiding the pad.

Now I’m more ready than ever for the racing season with my clean-bottomed good old boat!

Ferman Wardell began sailing an 11-foot Styrofoam Snark on a  30-acre lake in North Carolina. After sail-schooling at NC coastal Camp Sea Gull, he owned a 12-foot Scorpion and a San Juan 21. He now cruises and races Wind-Borne, a 1985 Hunter 28.5, on Lake Norman near Charlotte. He has sailed extensively in the Caribbean. Ferman enjoys boat maintenance, repair and “improvements.”

Ferman Wardell began sailing an 11-foot Styrofoam Snark on a 30-acre lake in North Carolina. After sail-schooling at NC coastal Camp Sea Gull, he owned a 12-foot Scorpion and a San Juan 21. He now cruises and races Wind-Borne, a 1985 Hunter 28.5, on Lake Norman near Charlotte. He has sailed extensively in the Caribbean. Ferman enjoys boat maintenance, repair and improvements.

Dress Up the Steering Wheel 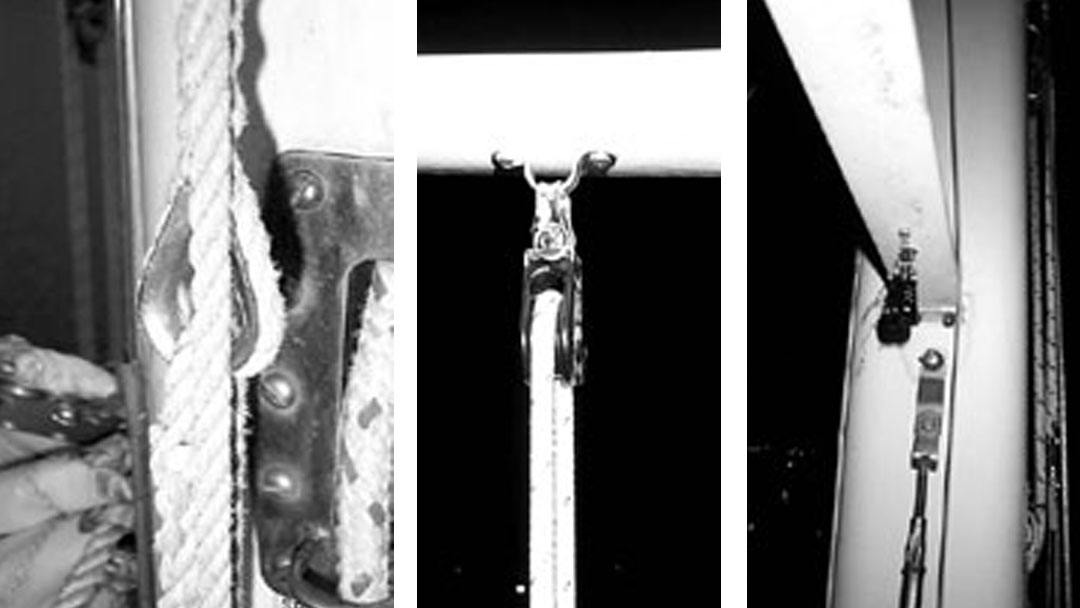