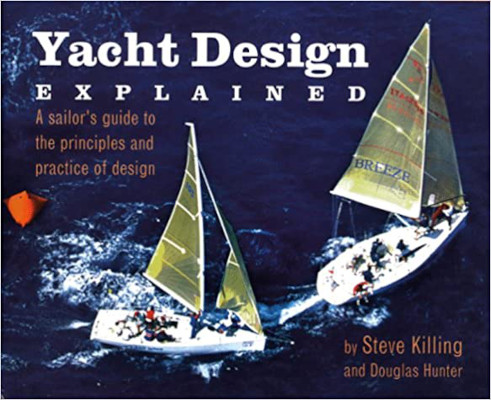 Why do some yachts have long overhangs and sharp ends while others have plumb bows and very broad sterns? In Yacht Design Explained, Steve Killing and Douglas Hunter explain how different racing handicap measurement rules have spawned very different types of boats.

Yacht Design Explained is a well written and illustrated “explanation of the science behind the art of yacht design,” the mission stated in the introduction. The authors start by presenting enough fundamentals to allow the reader to understand the more complex topics which follow. Simple nomenclature is followed by an explanation of line drawings, hull speed, drag, and stability. With these fundamentals in hand, the reader is swept along on a review of design considerations with sections on hulls, keels, ballast, rudders, rigs, and sails.

There are numerous explanations and examples of how the CCA, IOR, and IMS measurement rules have influenced the design of racing and non-racing boats. Killing contends that some design characteristics that made sense for a racing boat being measured for a handicap make no sense for cruising boats. In some cases, adoption of the racing boat characteristics will actually make cruising boats slower. He contends that cruising boats tend to add these undesirable features just because they are fashionable, and he points out that when designing to a measurement rule, it is desirable to trick the rule by employing characteristics that the rule will measure as slow, while they are, in fact, not as slow as the rule predicts. A boat designed without regard to a racing measurement rule should always be a better and simpler boat.

Hunter’s illustrations and Killing’s text support each other very well. In many instances several examples are offered to explain the same point. This allows the reader to visualize the concepts with a richness not always offered in a technical volume of this sort.

Steve Killing also offers frank discussions of aspects of his personal career. He describes work that went well and work that did not go well. For example, he explains the limitations of scale model tank testing and describes how data from tank testing led to America’s Cup boats that were notably slower because of features that tested well in the tank, but did not scale well to full-sized models.

The book ends with a section on the America’s Cup. Killing and Hunter recap how the various measurement rules influenced the designs of the challengers and defenders. Breakthrough features like the winged keel are explained in terms of their response to peculiarities in the measurement rule. Killing contends that a winged keel is a solution that is rarely appropriate unless draft is severely penalized, as was the case in the 12-meter rule.

The book succeeds in making the America’s cup design competition more interesting than the actual racing, in many cases, has been. For example, the recent monohull and multihull race/legal battle farce may have offered little for people keen on competitive racing, but it did generate some technically interesting boats.

In Yacht Design Explained the authors have not only demonstrated their mastery of the topic, they have made this complex subject very understandable. It is recommended reading for those who are curious about why boats are the way they are.

Yacht Design Explained: A Sailor’s Guide to the Principles and Practice of Design by Steve Killing and Douglas Hunter (W.W. Norton, 1998)

Jerry Powlas and his wife Karen Larson, began sailing together in 1990 and founded Good Old Boat magazine together in 1998. Retired these days, they still have too many boats and a long list of ongoing boat projects. They sail Mystic, their C&C 30, on Lake Superior and Sunflower, their trailerable Mega 30, during the shoulder seasons. 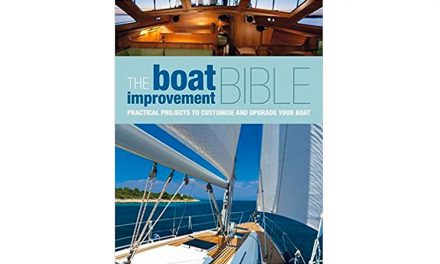 The Boat Improvement Bible: Practical Projects to Customize and Upgrade Your Boat