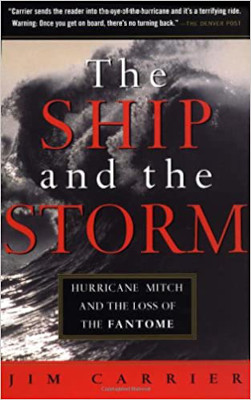 The loss of the schooner Fantome, in which 31 people died, is a tragedy that has become painted with passion and prejudice. It is hard to imagine that a book could be written that would not fall into a posture of obfuscatory defense or egregious attack. She was lost in Hurricane Mitch in October 1998, the worst hurricane ever recorded in terms of lives and property destroyed. Mitch sank the Fantome and erased the physical progress that Hondurans took a generation to build.

This story, in which opinions of responsibility and judgment are widely divergent, could only be chronicled with an even hand by a mature and able journalist trained to report, not to judge. I confess that I could not give the devil his due, whether the devil be the human owners, as some believe, or whether, as others claim, that it was that old devil the Sea itself that called the dirge. But Jim Carrier, in his exhaustive and even-handed reportage of the death of the Fantome in his book, The Ship and the Storm, carefully records the lessons that must be learned from this tragedy. The book reads with the force and flow of a work of fiction. The people, both on and off the beleaguered vessel, are three-dimensional, real blood-and-muscle folk with families, hopes, and husbanded Christmas gifts gone now to the deep with them.

The vessel, built by an English duke, never achieved the nobility that had been built into her. When she was lost, she had been reduced to the fakery and the fantasy of pale and pulpy landlubbers desperately reaching for adventure. The ship is revealed in the book so exquisitely that the reader can walk through her decks and companionways as through a hologram and follow the desperate movements of officers and crew attempting to save an unsaveable ship.

What is best reported in The Ship and The Storm is the coalescence of bad judgment and bad luck. All who watched and waited on shore prayed to the very last random twist of the blindly malicious storm that the vessel might somehow have survived. In the end, the Fantome sank somewhere off the coast of Honduras, where she was inexorably blown into shoal water. With the winds shrieking at 150 miles an hour and seas pushed up vertically to heights that could have topped the masts of the 300-foot vessel, she went down so suddenly that no cry for help was heard. It is a cautionary tale for charterers who put their lives in the hands of others who may well be businessmen and absentee landlords.

But it is also a book that should be read for the sheer power of a sea tale of horror, greed, ineptitude, screaming winds, and towering bad luck. There will be other books on this subject, but there is not likely to be another that tells the tale so fully, so graphically, and so free of judgment.

The Ship and The Storm by Jim Carrier (McGraw-Hill/International Marine, 2000; 272 pages)