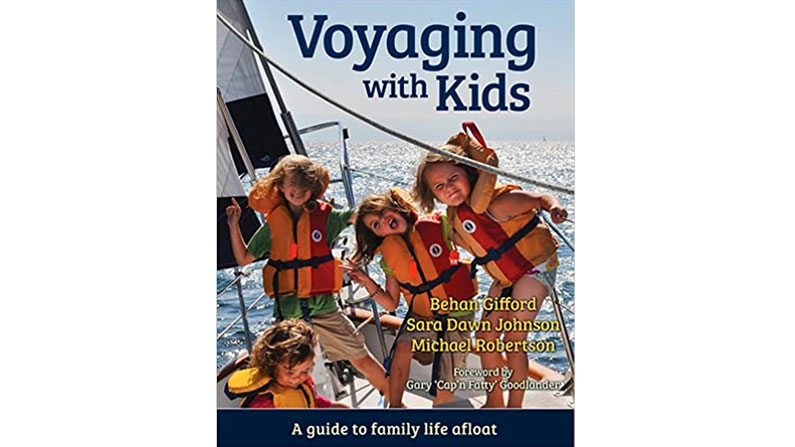 The best thing parents can do for their children these days is to unplug them from society and give them a wider and deeper perspective of the world and more meaningful ways to experience life as they grow. The best way to remove them from the bad influence of today’s tasteless movies, violent video games, and shallow peers is to take your kids cruising.

As more parents are doing exactly that, a brand-new book on the subject tells how. Voyaging with Kids: A Guide to Family Life Afloat was written jointly by a trio of sailors who have made this choice. Their collaboration is being supported by Lin Pardey who is publishing the book and has watched many cruising kids grow into extraordinary people over the years since she and Larry first threw off the docklines.

Authors Behan Gifford, Sara Dawn Johnson, and Michael Robertson each represent one half of a cruising couple that has been out there voyaging with their children for several years. They address the issues of breaking away from land-based commitments, dealing with the naysayers, and helping children make the transition. They talk about choosing a family cruising boat, safety afloat for kids of all ages, staying healthy, and provisioning for a family aboard. They specifically address issues surrounding cruising with infants and — at the other end of the spectrum — cruising with teenagers.

They also discuss how families spend their days aboard (with chores, holidays, home schooling, and great playtime) as well as relationships aboard and those they develop with other cruisers and cruising families. Just as important as transitioning to life afloat, they also cover preparing for the end of a voyage and re-entry into the hyper-society they left behind.

My favorite part of this book is the essays by former cruising kids, those who spent several years afloat. We often wonder what has become of them. Did they get a proper education? Did they grow up properly socialized? Do they look back fondly on their cruising years? Yes. Yes. And yes. While some, once grown, have planted the anchor firmly inland, many have continued to sail or cruise as adults on their own boats. They are exceptional adults in every sense of the word and a tribute to the idea of family cruising.

This is a gorgeous book with additional interviews with, and input from, many other cruising families. If you know of a sailing family with the dream of cruising, buy them the book and then watch their children blossom — far from the maddening crowd — into very capable, independent, and special people.