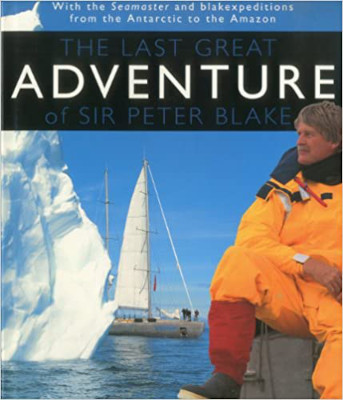 This large-format book documents the voyage of Sir Peter Blake and crew of Seamaster, from Auckland, New Zealand, across the Southern Ocean to the Antarctic Peninsula and then to South America and up the Amazon River. It is a beautiful book about an amazing man on an incredible voyage in a most unique sailboat. This is the ultimate coffee-table book. I tested it on unsuspecting friends. Not one could resist picking it up, and all were intrigued. The ensuing conversations inevitably turned on the voyage of Seamaster.

Seamaster is a fascinating boat, a vessel designed to safely bring her crew from the Antarctic to the Amazon and yet model how wastes can be managed in an environmentally sound manner. Sir Peter Blake received two Sportsman of the Year awards, four Yachtsman of the Year awards, and the Prix de L’Aventure Sportive. He was named Member of the British Empire (MBE) and Officer of the British Empire (OBE). Sir Peter was Special Envoy of the United Nations ‘ Environmental Programme (UNEP). He received a knighthood from Queen Elizabeth in 1995, and was considered ” a good Kiwi Bloke” by his mates.

He sailed Sydney-Hobarts, Fastnets, the Doublehanded Round Britain Race, Trans-Tasmans, a trans-Atlantic race, and the two-handed Around Australia Race. He won the Whitbread, the Trophée Jules Verne, and the America’s Cup. With six trips around the world, Sir Peter logged more than 600,000 sea miles.

Sir Peter became aware of damage to the oceans while racing around the world. He noted a decline of the giant albatross from the 1980s. The seabirds become entangled in the enormous fishing nets deployed by commercial fisheries. He was concerned by the trend in commercial fishing that target and remove entire fish stocks. “Incidental catch,” such as an albatross, is discarded by an industry too focused on the bottom line.

When reading Sir Peter’s log book, it is easy to forget that he is gone. I enjoyed the daily progress of Seamaster and her crew. Each daily log has entries for: latitude, longitude, course, sea, air temp., sea temp., barometer, and location. This data is followed by Sir Peter’s narrative about events on board or comments on the history and geography of the region and notes on the wildlife observed. Sometimes the narrative comes from crewmembers discussing an area of special interest. Narrative is always accompanied by photographs, some spanning two pages to increase their dramatic effect.

Sir Peter’s comments bring to mind the ideas of Jacques Cousteau. That is not surprising. Sir Peter assumed leadership of the Cousteau Society in 1997 after Jacques’ death. He left the Cousteau Society to form his own organization, Blakexpeditions, to educate and motivate the young about ecological causes, especially the state of the world’s oceans.

When Seamaster turns to begin the journey back down the Amazon, I feel a sense of sadness, knowing the adventure must end with the murder of Sir Peter by river pirates.

The Essentials of Living Aboard a Boat: Book Review