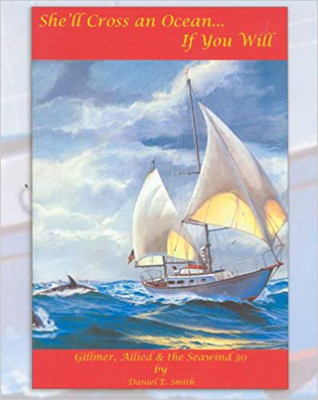 Dan Smith became the de facto historian of the Allied Boat Company as the corresponding secretary of the Allied Seawind Owners’ Association. The cartons of documents which came with the job elevated his interest in the company which had gone out of business in 1984. Soon he was searching for more information about the company. The rest, as they say, truly is history . . . a history book for the owners and lovers of Allied Boats, the Seawind 30 in particular and other boats by Tom Gillmer.

She’ll Cross an Ocean If You Will is Dan’s summary of his research conducted over many years, the story of his own Seawind 30 which was damaged beyond repair in a hurricane, the stories of two famous Seawind sailors (Alan Eddy and Dan Jelsema), and background about the Seawind Owners’ Association.

Most importantly though, Dan’s book presents the history of the Allied Boat Company and a profile of designer Tom Gillmer. For Gillmer fans and those who are passionate about the Allied boats (most of which have something akin to cult status) this book will be invaluable. Due to Alan Eddy’s historic first circumnavigation between 1964 and 1969 in a fiberglass boat — the Allied Seawind 30 — this book is relevant to all those who now follow behind so willingly in fiberglass boats whether on bluewater passages or coastal cruising. We have the fiberglass pioneers to thank for our boats today.

The Allied Boat Company, designer Tom Gillmer, and Alan Eddy are our heroes, and we can thank Dan Smith for telling their stories in She’ll Cross an Ocean If You Will.