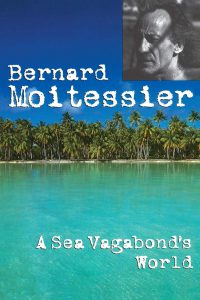 Eric and Susan Hiscock, Peter and Ann Pye, and Bernard Moitessier are immortals of ocean cruising in the days before electronics when sextants and good, old-fashioned DR plotting, and meticulous pilotage carried one over the horizon and along challenging coastlines. Moitessier was one of the last of these unique folk, famous for his lengthy voyages and simplicity aboard. A Sea Vagabond’s World is his last, incomplete book, completed and ably edited by his companion, Véronique Lerebours Pigeonniére. As she says, he was part fish and part monkey, “which was very useful at sea.” He merged with the sea in ways that are unintelligible to many modern-day sailors by philosophically merging himself with the marine environment, just like ancient navigators.

Sea Vagabond is a fascinating mix of experience and philosophy. The book has four major parts. The first two cover preparation and fitting out. Moitessier believed in starting modestly and provides a fascinating chronicle of his boats. In the end, he thinks 32 feet LOA is ideal. The Fitting Out chapter is crammed with wise recommendations and common sense ideas on everything from ground tackle (heavy) to rigs and navigational aids. Interestingly, had radar been truly affordable in his day he would have shipped out with it. The Distant Shores section is a gold mine of wisdom on everything from hurricanes and weather forecasting to heaving to and anchoring. Moitessier provides you with a mix of common sense, philosophy, and practical advice based on his unrivaled experience. This is one of the few cruising books that talks about adaptation, solo sailing, beachcombing on Pacific islands, and aptitude, a far cry from the often-macho encouragements that appear in the literature. No one would describe this book as a definitive guide to ocean cruising, or, for that matter, beachcombing, but that’s not the point. Sea Vagabond is the book you should read first if you’re contemplating long-distance cruising, digest its advice, and then go onto more lengthy tomes while sailing to gain experience. He covers cooking in the tropics, knockdowns, maintenance, self-sufficiency on tropical islands, and woolen socks—and that’s just a start.

If Moitessier’s down-to-earth, no-nonsense, workmanlike book makes you realize that you’re not by nature an ocean sailor, great. But if you decide to go, there is more wisdom in these pages than in many books three times its length. Moitessier knew what he was talking about and we’re fortunate that he distilled his experience in this work.

Reviewer Brian Fagan was born in England and trained in archaeology and anthropology, earning a PhD in 1964. From 1967 to 2003, he served as a professor of anthropology at the University of California, Santa Barbara. He’s written dozens of acclaimed books on a wide range of archeological and anthropological topics, nearly all aimed at a general audience. Along this path, he’s found time to pursue his sailing passion and is the author of a few books about sailing California’s Channel Islands. His The Cruising Guide to Central and Southern California: Golden Gate to Ensenada, Mexico, Including the Offshore Islands is considered a bible among Southern California sailors.