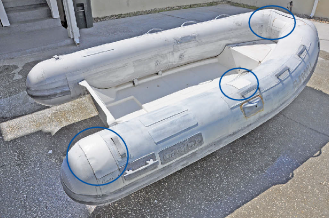 When I bought my Down East 45 schooner, Britannia, she didn’t come with a dinghy, but she had very sturdy aluminum davits just waiting for a new dink. I considered the types of inflatables available and decided I wanted a rigid inflatable boat (RIB). And I wanted one made of Hypalon because it is more resistant to sunlight and abrasion than the less- expensive alternative, PVC. The only stumbling block was the cost, which, at $3,000 to $4,000 for a new boat, was well outside my budget. 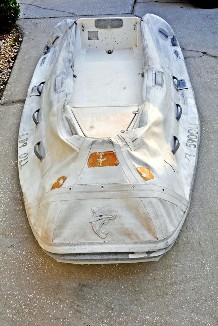 Roger obtained the dinghy for nothing, which made it worth his while to try to renovate it.

Because it was worth a try, I posted on the CruisersForum website, asking if by chance anyone had a small used RIB to sell for around $500. I wasn’t optimistic; used RIBs usually sell for more than that, so I was pleasantly surprised to receive a reply from a fellow named Chris. He had an old 10-foot Caribe RIB in his backyard in Sarasota, Florida, that I could have for nothing if I picked it up.

We drove the 120 miles in my minivan the next day and picked it up. It was a 16-year-old C10X model and decidedly dilapidated. For the price, though, I couldn’t really be choosy. I publicly thanked Chris on the forum.

Only one of the three compartments held pressure, but the fiberglass bottom was in good condition. It cleaned up well, after we flushed out a few dead frogs and roaches.

For three days, I tried to find the leaks, using an electric air-mattress pump and the soap-and-water test method. I finally decided to have it professionally inspected.

After a local inflatable-boat shop fitted patches (visible by their paler color) on the bigger leaks, and Roger made other repairs, he painted the dinghy with a special topside paint and highlighted the rubbing strake in blue to match the hull color of his Down East 45 schooner, Britannia.

When it was inflated with a commercial compressor to the correct pressure, the leaks immediately began to bubble up. Some were not in the seams, where I assumed they would be, but in the material itself. One air valve also leaked, and five larger leaks needed patches. The patches and a new air valve cost $220.

The slower leaks, called bleeds, were permeating through the material. They needed to be tackled from the inside, using an internal inflatable-boat liquid sealer.

I contacted Dan O’Connell, owner of Inland Marine in Cape Coral, South Florida. His company makes all sorts of stuff for repairing and restoring inflatable boats. Dan was extremely knowledgeable and helpful, even to the point of advising me not to bother with one of his products that an employee had recommended, saving me $150. He recommended I start with their Inflatable Boat Sealant, which is injected into the boat’s chambers through the air valves to seal leaks from the inside. I bought a bottle for $55. 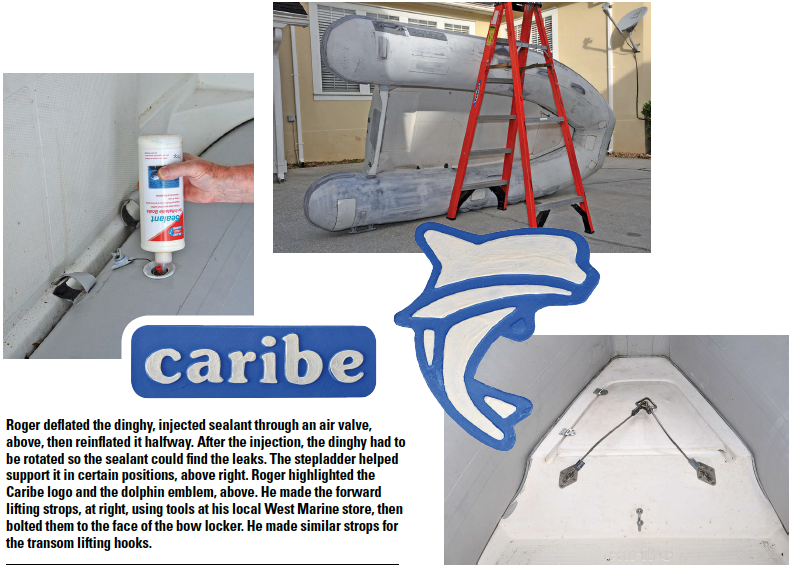 One chamber at a time, I injected the liquid through the valve, then half-inflated the chamber and tilted it so the liquid would run down the inside to roughly where the leaks were, on the top sections of the tubes. As I understand it, the sealant “atomizes,” becoming airborne inside the tubes, and coagulates in the perforations where air is escaping. Excess liquid dries to a light film on the insides of the chambers, helping to prevent future porosity problems.

The instructions for the sealant said to rotate the boat every 30 minutes to allow the fluid to coat the rest of the inside of the chamber. However, my wife and I found it very difficult to hold this heavy boat in the upright position — until I hit on the idea of supporting it with my stepladder. We rotated it in this way, 90 degrees at a time, hoping that the liquid would coat the whole of the inside of each chamber, then left it overnight.

The next day, I inflated the boat as hard as my air-bed pump would make it. This was not as hard as the manufacturer’s specified pressure of 0.2 bar (2.9 psi), but I planned to buy a more powerful foot pump if we had managed to stop the leaks. After leaving it in my garage for another night, I inspected it in the early morning, while the air temperature was still cool. To my pleasant surprise, all three chambers were still hard. As days passed with no appreciable loss of pressure, I became confident the leaks were sealed.

I then ordered a dinghy foot pump with a built-in pressure gauge from Defender for $36.

Unfortunately, even though it had six adaptors for different nozzles, the foot pump didn’t have the Halkey-Roberts latching adaptor used on Caribe dinghy valves. I bought one from Amazon for $7. The foot pump enabled me to inflate the boat to the manufacturer’s recommended pressure for the first time. Three pounds per square inch may not sound like much, but I had visions of the whole thing exploding and blowing the roof off my garage.

The next stage was to improve the dinghy’s scruffy appearance. I sanded the whole topsides with 80-grit sandpaper to remove some of the paint that had been applied years ago and was now loose. I then emailed a couple of pictures to Dan, who suggested I should just paint the boat with their topside paint, which is available in seven colors. I ordered a quart of gray and a pint of blue for $70.

I began by masking all around the rubbing strake, then gave the strake two coats of blue, using a throwaway brush. I also painted the Dolphin logo on the bow and the Caribe logo on each side, highlighting them with white paint.

The next step was to paint the whole of the topsides of the tubes. I masked off the rubbing strake, the oarlock sockets, and all the handles. I decided to roll the paint over this large area with a 4-inch nylon roller. Two coats covered up most of the scratches and left a very presentable semigloss finish. The boat now looked almost new.

I then visited our local West Marine store where, using equipment in the store, I made two stainless-steel wire strops, along with U-bolts to attach to the forward locker, for a total cost of $25. The transom already had two U-bolts. Mounting lifting strops to the solid hull of a RIB is easy. 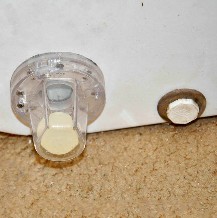 The special transom drain allows water to drain out of the dinghy when it is slung in davits at an angle, but the ball stops water entering when the dinghy is in the water.

The transom drain plug was missing when I got the boat, so I fitted an automatic scupper drain from West Marine for $20. The ball valve prevents water from entering, but drains a boat that’s angled in the davits. This saves having to reach over and remove the drain plug when the dinghy is in davits. 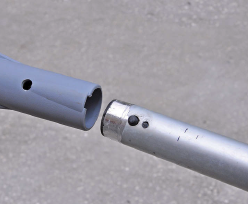 Roger had to file down the ends of the oar handles before they would fit into the new blades.

The blades of Caribe oars clip to the shafts with a spring-loaded button, but they were missing. I contacted Caribe Nautica, Doral, near Miami, Florida, and bought two blades for $61. However, they wouldn’t fit the shafts, because a lip inside the blade prevented it from engaging the button in the shaft. I simply filed a very small ridge all the way around the end of the oar shaft to make it slide on. I didn’t like the idea of a single spring button holding the blade anyway, so I also screwed a stainless- steel self-tapping screw through the blade into the oar for extra safety.

We had a grand launching at the boat ramp near our marina. I then rowed the dinghy to Britannia’s stern and hooked it to the carabiner hooks on the davits. 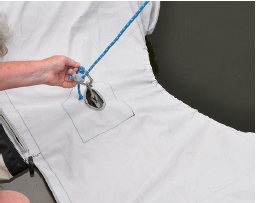 He modified the dinghy’s cover with grommets for the lifting strops and a zippered center section that facilitates fitting the cover onto the dinghy.

I had bought a cover to protect the dinghy from the harsh Florida sunlight, but stretching it over the front and rear of the tubes, then hooking it to the lifting lines through the grommets I had sewn in the cover, proved very awkward while the boat was in the water. More than once, I nearly fell in when leaning over to stretch the cover over the aft ends of the tubes. I finally made this much easier by stitching two zippers into the cover to make a wide flap in the center. I can work inside the flap to fit the cover, then zip it up when the boat is in the davits.

The extra weight of a RIB did not faze my electric hoist, which easily raised it out of the water in 20 seconds. 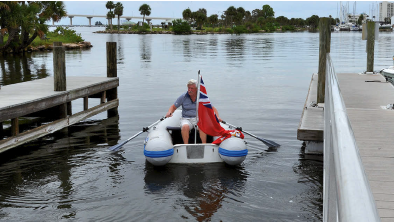 After completing the restoration work, Roger launched the dinghy and rowed it to the stern of Britannia.

We had put a lot of elbow grease and cash into this project, not knowing if it would ultimately be worthwhile. But we now have a very strong, presentable dinghy. Not only does it enhance Britannia’s appearance, but I also feel confident using it. 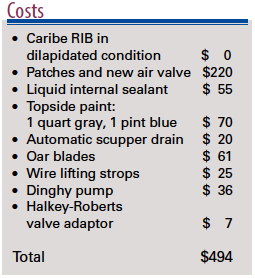 Roger Hughes has been sailing for nearly half a century as a professional captain, charterer, restorer, and happy imbiber on a lot of boats. His present project, the restoration of Britannia, a once run-down Down East 45, is nearing completion after six years (he thought it would take two at the most). Roger and his wife, Kati, look forward to cruising in 2018 and using all the innovations he has incorporated into the boat, many of which have been featured in Good Old Boat. Roger has documented more projects on his website: schooner-britannia.com. 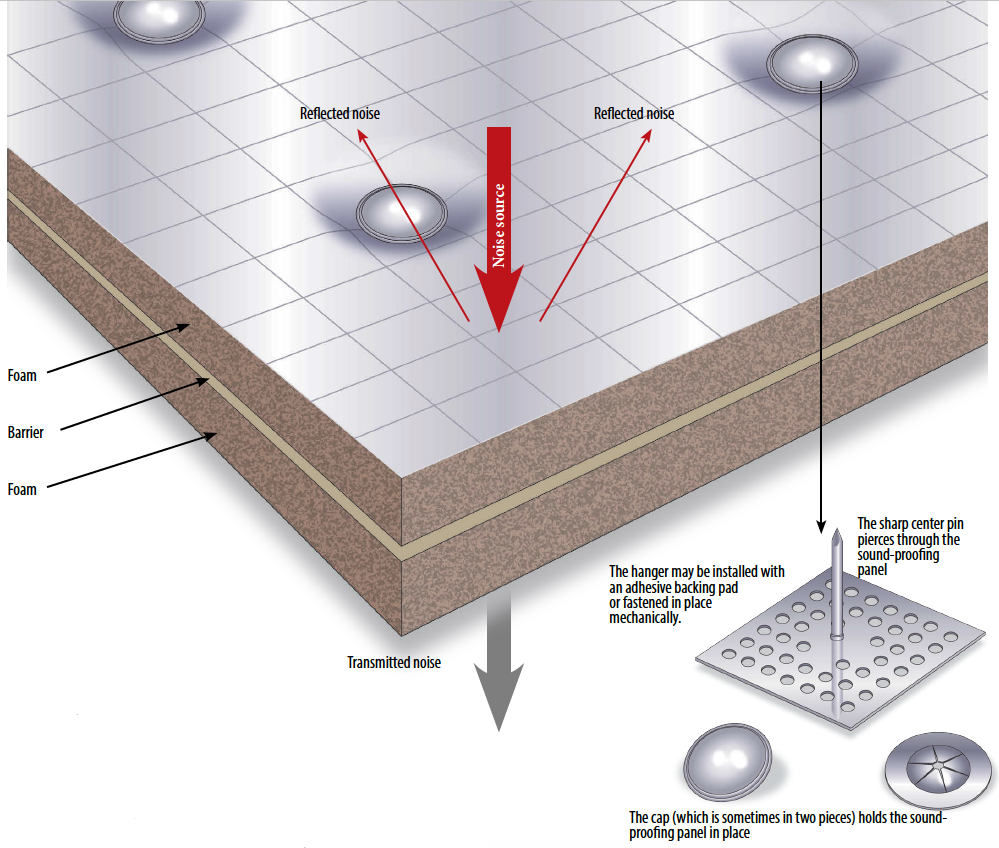 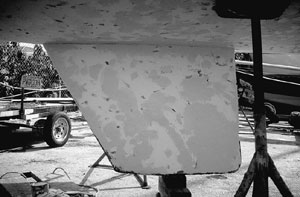 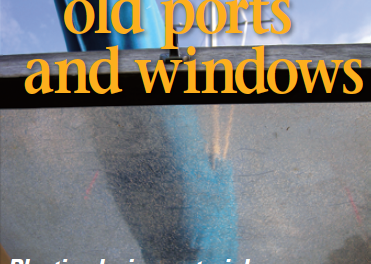 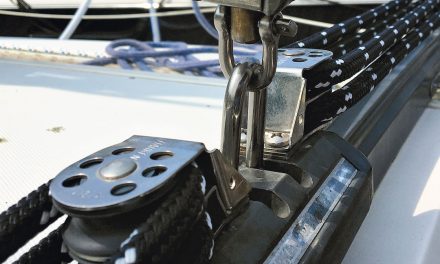