Parallel Parking with the Ferry Glide 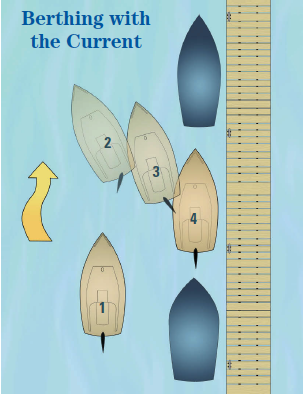 Approach slowly with the current (1) until opposite the berth, then turn to port (2) while engaging reverse gear. Turn the rudder the other way while easing in and out of reverse to hold the boat on station (3) while it slides sideways into the berth (4).

An old salt learns an old trick from a docking master

On day six of a challenging singlehanded adventure tackling the Delmarva loop aboard Base Camp, my 27-foot Pearson, I approached the Delaware City Marina dock to tie up for the night. I looked forward to this respite, having that day completed the passage northbound up Delaware Bay.

The Delaware City Marina is essentially a quarter- mile-long dock running parallel to the shore in a 50-foot- wide channel that was once an eastern entrance to the Chesapeake & Delaware Canal but now abruptly dead-ends at a low, unpassable multi-lane concrete bridge. The dock- master, Tim, had assigned me a space on the dock between two larger boats that was not much longer than Base Camp’s length. What was going to make the parking job more challenging than I liked was the current from astern that was pushing me toward that concrete bridge at more than 1 knot.

As I wondered how I was going to pull this off, Tim assured me over the VHF that he’d talk me through a precise maneuver that would make it happen. He warned me that some of his instructions may sound counterintuitive. Then, using the current, prop walk, engine, rudder, and Tim’s clear instructions over the radio, I performed what I later learned was called a Ferry Glide. 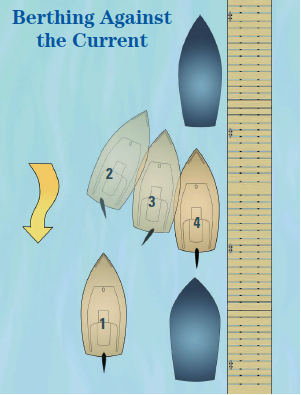 This is essentially the same maneuver but using forward gear and prop wash on the rudder to align the boat and hold it against the current (3).

I approached at idle speed and, just before my boat was lined up with the parallel berth, turned the rudder to port and angled my boat about 30 degrees away from the dock (see “Berthing with the Current,” below). I then reversed the engine and matched my boat speed to the pushing current to hold the boat stationary. With the propeller effectively acting as an anchor, the boat began to pivot to starboard to align itself with the current. To counter that force I turned the wheel to starboard. As I feathered the engine in and out of reverse, the boat slowly began to slide sideways into the slip. Base Camp gently touched the dock, and I handed my lines to my expert instructor. I was lined up perfectly between the two berthed boats.

Had the current been in the opposite direction, I’d have maneuvered according to the diagram “Berthing Against the Current,” using the hull and rudder in the opposite way and feathering between neutral and forward.

Jordan Snyder, a lifelong explorer and sailor, runs expedition-style multi-day sailing adventures and photography workshops aboard his Pearson 31-2, Base Camp II. He also works on environmental research and citizen-science projects to help promote awareness of complex conservation issues. Join his adventures at BaseCampSailing.com

Brewer By The Numbers 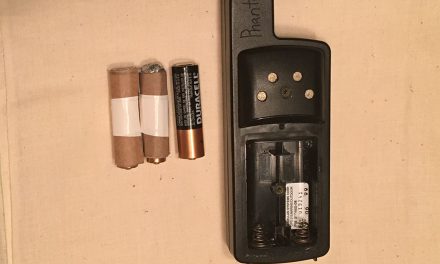 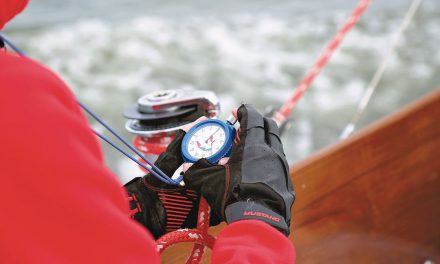 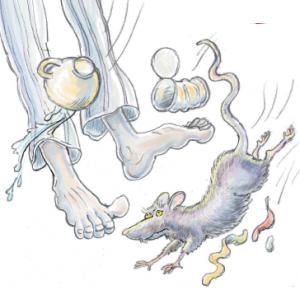 The Rata of Seville