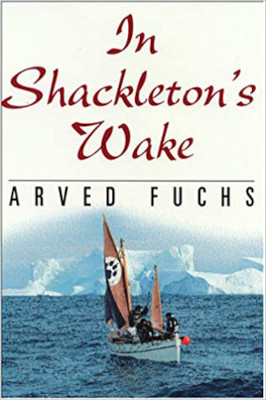 Is it cynical to place yourself voluntarily in the position of desperate men whose only thought was of reaching home safely?” An interesting question. Author Arved Fuchs asks this question several different ways during the telling of his reenactment of Sir Ernest Shackleton’s journey from Elephant Island to South Georgia.

Along with three fellow adventurers, the author sets out to recreate Shackleton’s 1916 journey for survival in an open lifeboat, a journey of 700 miles at 60 degrees south latitude. This is followed by a 30-mile crossing of South Georgia over mountains and glaciers never before crossed by man.

The book that results, In Shackleton’s Wake, has much to recommend it. I learned more about Shackleton than I had ever known, and I went to school in Australia, a country where Shackleton was one of the heroes. When I finished reading, my first thoughts were: “What Shackleton did was extraordinary; what Fuchs did was interesting.”

That is not to take anything away from what Arved Fuchs and his companions did. In fact, the author may have underplayed the intensity of his experience. His goal was not to outdo Shackleton; it was to recreate the journey as closely as possible. By comparing his position and situation with Shackleton’s, he ties the two journeys together. At one point he stands at the top of the glacier where Shackleton deliberately slid down 2,000 feet into the unknown, and he doubts if he would have had the courage to make the same decision.

In making his comparison, Arved Fuchs creates a very readable tale. He goes so far as to question a number of the decisions made by Shackleton, and he backs those challenges with the authority of experience in the Antarctic.

This book’s a keeper. It is full of interesting facts and information, told in a very readable style. It’s worth the read if you just want to find out more about Sir Ernest Shackleton. For those who are interested in contemporary adventures, the journey of Fuchs and his companions will hold your attention.

For those with a technical interest in things sailing, there is an appendix covering details of the rig of the James Caird II, including formulas for working out the minimum diameters of masts and shrouds. And yes, Arved Fuchs answers his own question several different ways.