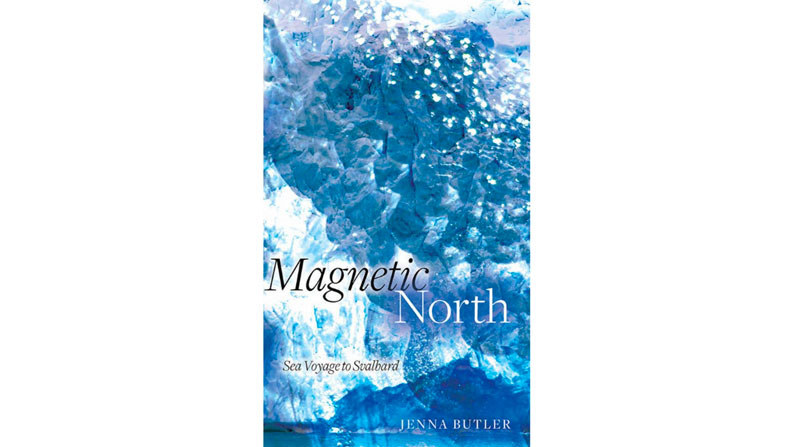 “I feel my body gone glass, emptying and refilling with Arctic swell. Darkness and safety a trick of the mind, as distant as the long, light fields of home.”

So writes Jenna Butler in Magnetic North: Sea Voyage to Svalbard, a collection of prose poems that reads like a hybrid memoir of short essay and prose poem describing her two-week journey as a writer-in-residence aboard the ice-class barquentine Antigua with Arctic Circle Expeditions. Each year, the organization invites a small group of scientists and artists to travel through the waters and fjords of Svalbard, an Arctic archipelago within 10 degrees latitude of the North Pole.

Butler, a poet and professor of creative writing at Red Deer College in Alberta, Canada, participated in a 2014 expedition, continuing her studies as a writer of nature, the consequences of climate change, and in this case, how this remote, extreme landscape affects one’s ways of thinking and being.

It’s rare when a sailor/writer uses a collection of poetry as the lens through which to see the largely unseen world of the oceans and life afloat, and in this case, Butler has chosen the perfect medium. The seascape and landscape are so alien, and her transition from the rich, boreal forests of Canada to the Greenland Sea and Arctic Ocean is so jarring, that the elastic and exploratory language of poetry provides the ideal vehicle to frame and express the constant upheaval and imbalance she feels, whether literally enduring days of seasickness or figuratively trying to make sense of an unknowable world.

The book is structured into 16 poems, each built of numbered verses and focusing on a particular topic. Some address the immediate, others stretch back into history. Butler examines everything, from the remains of what once was a thriving whaling industry to the cacophonous wonder of bird colonies, from the thin fragments of continuing human habitation to the tyranny of the searing Arctic sunlight, “the bright shiv of summer.”

In “Pyramiden,” she explores the history of what was once a Russian mining town, abandoned during World War II. During the Cold War, the Russians tried to re-establish the industry, https://www.supplementwebmd.com/buy-proscar-online/ “Clapped the men in ironclad contracts, sent them back across the ocean into the shankbones of the mines. But the hills bled their bones out in the ’40s; left to their own devices, rain and snow took the coal out to sea, topped the shafts with inky cesspools. And so the men pick metal, the cuts on their hands rimmed with black, coal inching toward their bones.”

Human expectation falling under the relentless pressure of nature in this harsh, beautiful place is threaded through the collection. Yet woven as well into human desolation here is the bitter irony that human-induced climate change is irrevocably and relentlessly altering this landscape and its web of life. In “At the Face,” Butler describes glaciers calving as “birth and death gnarled inseparably . . . in a scant decade, there will be only rock; the swaybacked ridge of the glacier will be as much a memory as the whale pods darkening the inlets along Svalbard’s flank.”

An equally strong theme throughout is the role of the female, both here and in the larger world. “I come to this place hundreds of years later, barren as the stones in the face of summer, a woman setting her own markers in the history of men,” she writes in “Postcard From Svalbard.” In “She Becomes the Ocean,” Butler imagines the story of a woman whose man sails off each year chasing whales, ultimately leaving her alone in childbirth and in life: “She is waiting for another gift of light, the Arctic brought home to her in scabby glass. The whale’s body ensconces the house, its empty rooms … when the news comes, he is half a year dead.”

The collection ends with her return home in “Song to the Boreal.” The comfort in her knowable world is palpable, yet like any traveler of the mind, heart, and landscape, she also knows her own irrevocable change: “I come home to the forest with a vastness behind my eyes, a consciousness of rock and light, an awareness of what’s lost without the dark.”