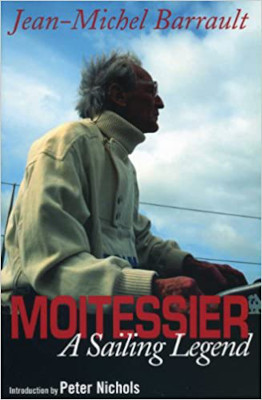 Bernard Moitessier, the sailor who might have won the first around-the-world-solo race but abandoned the attempt while leading, also abandoned his wife and children for idleness in the South Pacific, then entered the sailing imagination as a hero. Such a striking character and his extraordinary life provide rich material for the legend of the title. A split portrait emerges. We learn of Bernard Moitessier, the irresponsible wastrel, careless rookie sailor, and squanderer of great potential (he sank two boats because he fell asleep). We learn of Moitessier, the phenomenal solo sailor, mystic, and poet of the ocean, an achiever by any reckoning. He rounded Cape Horn twice.

Bernard Moitessier (1925-1994) wrote five books that established his reputation as a bluewater voyager and somewhat naïve philosopher. He believed in minimal equipment and accepting risk. Many others have written about him, particularly in French. Author, longtime friend, and literary pro, Jean-Michel Barrault, uses Moitessier’s books and quotes from years of correspondence to flesh out this short biography. The author has the advantage of an intimate’s insights and succeeds in bringing at least chronological order to a very messy life.

Poseidon smiled on Bernard Moitessier. Born the child of privilege in French Indochina, his birth date precluded service in WWII. He first went to sea and made lucky voyages in ill-found wooden vessels. When they sank, kind strangers gave him other boats and gear. As a vagabond who fetched up boatless on exotic island shores, people gave him the means to build life and boat anew. Strangers designed and built, for free, his most famous boat, the 40-foot steel ketch, Joshua, named after Slocum. Three months after its destruction by hurricane while at anchor, friends had raised funds and built him a new steel cutter. Women loved him freely, even after he abandoned them, a modus operandi for Bernard Moitessier.

What do we make of this remarkable sailor, this sensitive and tormented soul? His personal life sets an example best avoided. He outfitted boats by scrounging in boatyard dumpsters. He certainly had his sea time and must have learned from it. His Polynesian name and the name of his final boat, Tamata, means to try. He sailed the southern ocean in the manner of Vito Dumas, running wild and free before the roar of the storms. He sailed among the reefs of life, if occasionally onto them. We can speculate that he found peace at sea and some respite from his inner demons. Perhaps kind strangers sensed this and repeatedly gave him the means to become part of the sea. 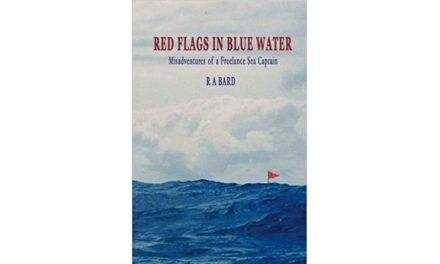