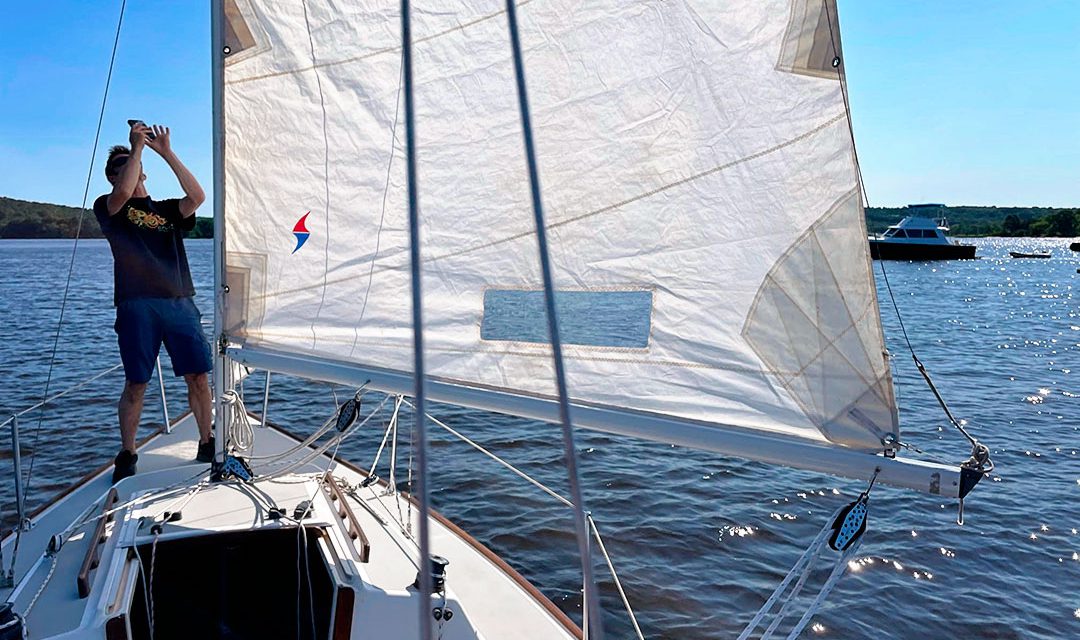 Essentially what this means is that as Good Old Boat’s new editor, I’ve done very little sailing this summer. Which is tough, because in Connecticut, beyond this being one of the wettest summers in recent memory (if only we could have sent some of the rain out west!), it has been incredibly breezy.

The sailing experience I’ve been missing most is being with friends aboard my 1966 Pearson Commander, Good Buddy, which until recently I kept in a local harbor. A big part of the allure was the low effort involved in the Commander’s use. As a 26-foot daysailer with a small cabin she had no complicated systems to speak of, and an easily managed sail plan. Her aging two-stroke was reliable. Step on, hoist sail, cast off: These were the three steps that represented freedom. 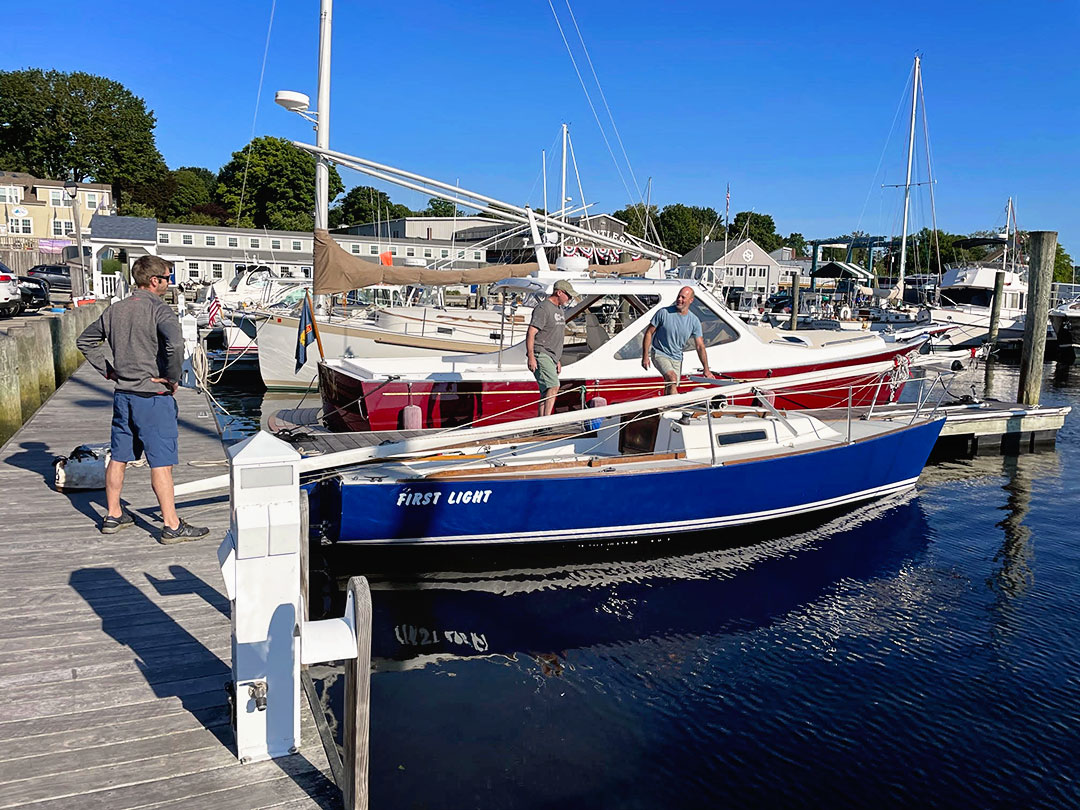 I sold Good Buddy two years ago and have been missing her ever since.

Recently a friend, Jonathan, informed me that he’d bought a 1985 J/22. He doesn’t need the boat—he lives aboard a X-442 that’s wonderful to sail—but he’s one of the most boat-crazy people I know, and the fact that he didn’t have something small enough to tool around in Essex Harbor, right outside his “door,” was killing him.

Jonathan finally took possession of the J/22, named First Light. What a beauty! It’s a 36-year-old time capsule. That is, it looks like a brand-new boat. All the standing and running rigging look new, the sails are crisp, and the spinnaker appears to have never been out of the bag. 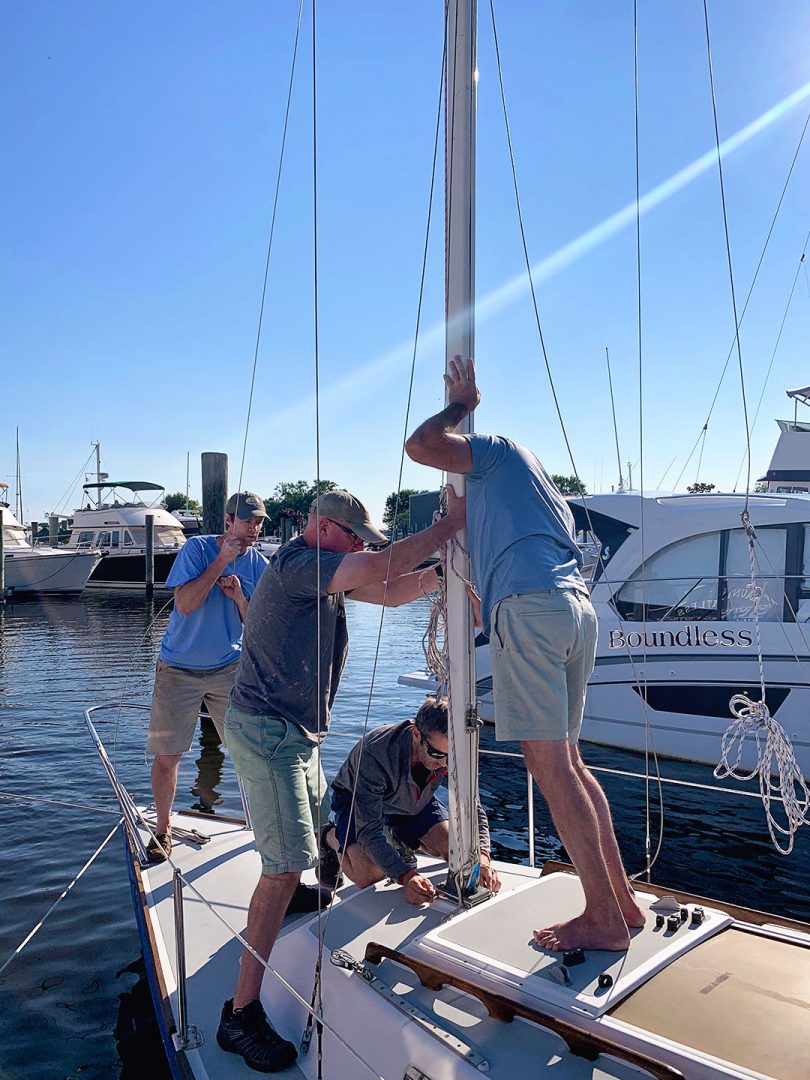 With the boat finally in the water, it was time to step the mast. Four of us accomplished this with ease—putting the mast up on my brother-in-law’s Hobie Cat is harder—we rigged it, and then came the inevitable question from my boat-obsessed friend: Want to get this thing out of the marina and go for a sail?

To be honest, I knew this question was coming, and dreaded it. Not the sailing part. The getting-out-of-the-marina part.

I need to back up a bit. In the late 1980s, Jonathan left Connecticut aboard an engineless J/24 and sailed it to Maine and back, towing a canoe as a tender. Being engineless, Jonathan had to sail around Cape Cod, versus taking the canal. It was an epic voyage he counts as the greatest of his life. And a big part of the magic, he says, was being engineless.

Which brings us back to the morning of the mast-stepping. First Light has a motor bracket, but Jonathan doesn’t intend to ever use it. Situated as we were, in a slip, deep in a marina filled with large boats, many of them power, the thought of sailing out into the harbor was highly agitating. Mostly because between us and the harbor was a fairly long, and narrow, canal, and there’s a small ferry (maybe 20-feet long) that flits back and forth across the canal with a fair amount of regularity.

And, of course, large power yachts frequent the canal. Getting “caught” there, without a motor, just seemed too rich. Like I’d automatically become a candidate for the Learning Experience section of this magazine.

I wasn’t worried about getting out—the wind would be at our backs—but I knew getting in, with the wind on our nose, would be a nightmare.

Of course I said yes. 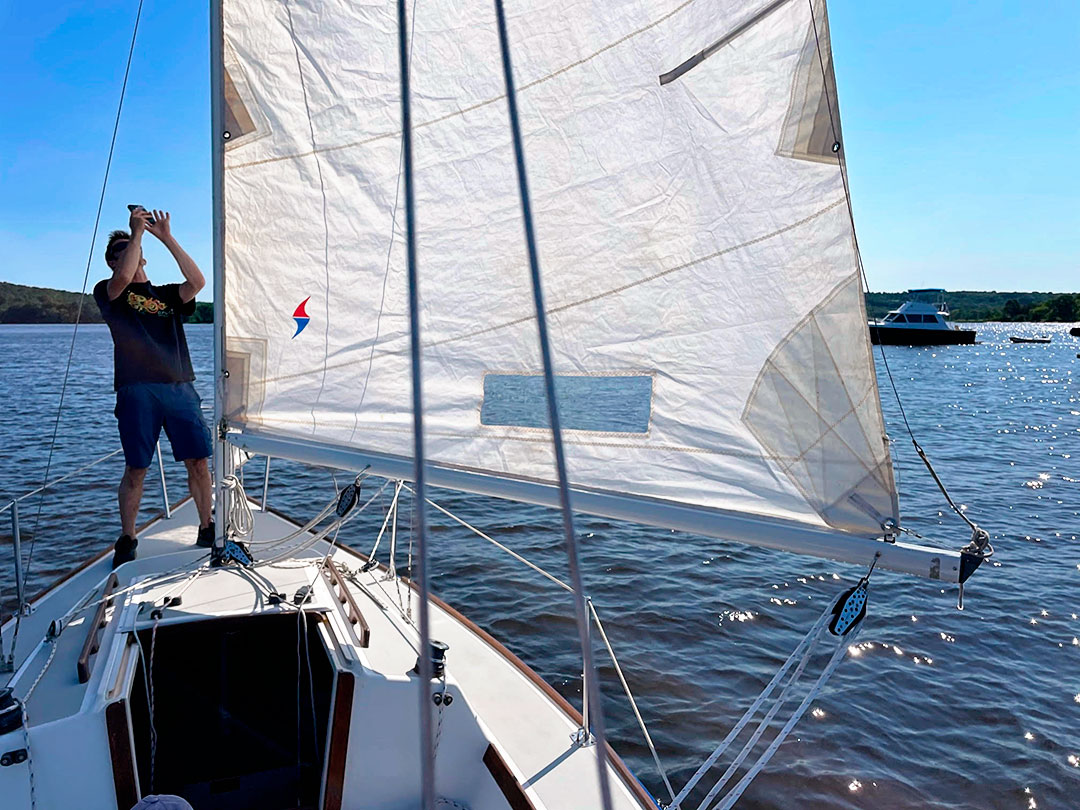 We left the marina under jib alone, and in short order had spanned the length of the canal and were into open water. No problem! Once in the harbor, we had a fantastic sail. This was my first time aboard a J/22, and it was just as sweet a sailing experience as I had anticipated. They really are amazing boats.

Then it was time to go back. Ugh. Another friend, Tom, and I, had been taking turns at the helm. But getting back through the canal was Jonathan’s responsibility. If things went south, by default, the stick should be in his hand.

Long story short: We short-tacked maybe eight times, in the faintest of zephyrs, back through. Did we disrupt the ferry? Um . . . yeah, a bit. Did we, at one point, tack so closely to someone on a dock waiting for the ferry that I could have high-fived him? Yes. Did a large power yacht emerge around the bend, in effect ruining our day and potentially casting aspersions on this editor? No.

And when we ghosted back into the slip, sails down, moving so slowly that a child could have stepped onto the dock and fended off, was there a moment of intense satisfaction?

I know many things conspired to make this particular sail great. Including the good fortune of timing, which allowed us to do our thing in the canal without the added pressure of trying to dodge a power boat on its way out. This would have necessitated us stalling First Light on the edge of the canal somewhere, and possibly even grabbing onto something until the boat went by. It was that tight.

But there is something to be said for occasionally sailing engineless–if your boat is up to the task, obviously–in situations in which you’d normally rely on a motor. I’m not advocating for reckless behavior. And I’m aware that the J/22, when you get right down to it, is a big dinghy. But there’s a sense of deep satisfaction in doing things strictly under sail. Like picking up a mooring. Or leaving that mooring. Or leaving that mooring, and, if the wind is right, exiting the harbor under sail (we’ve done it on the X-442). There might be the occasional look of disapproval, but I love witnessing bold moves under sail, and I bet plenty of other folks do, too.

I know I’m going to love this little J/22. It’s out on a mooring now, and I’ve been told to use her pretty much any time I want. Can the J fill the same role as Good Buddy? It’s probably not big enough to do that. But the J/22 is even simpler than the Commander was, and a far better boat to sail. The fact that Jonathan has vowed that no motor will ever hang off First Light’s stern was something I initially chafed at, but the idea has since grown on me.

There are small adventures out there, waiting to be had.

Now it’s just up to me to make them happen. 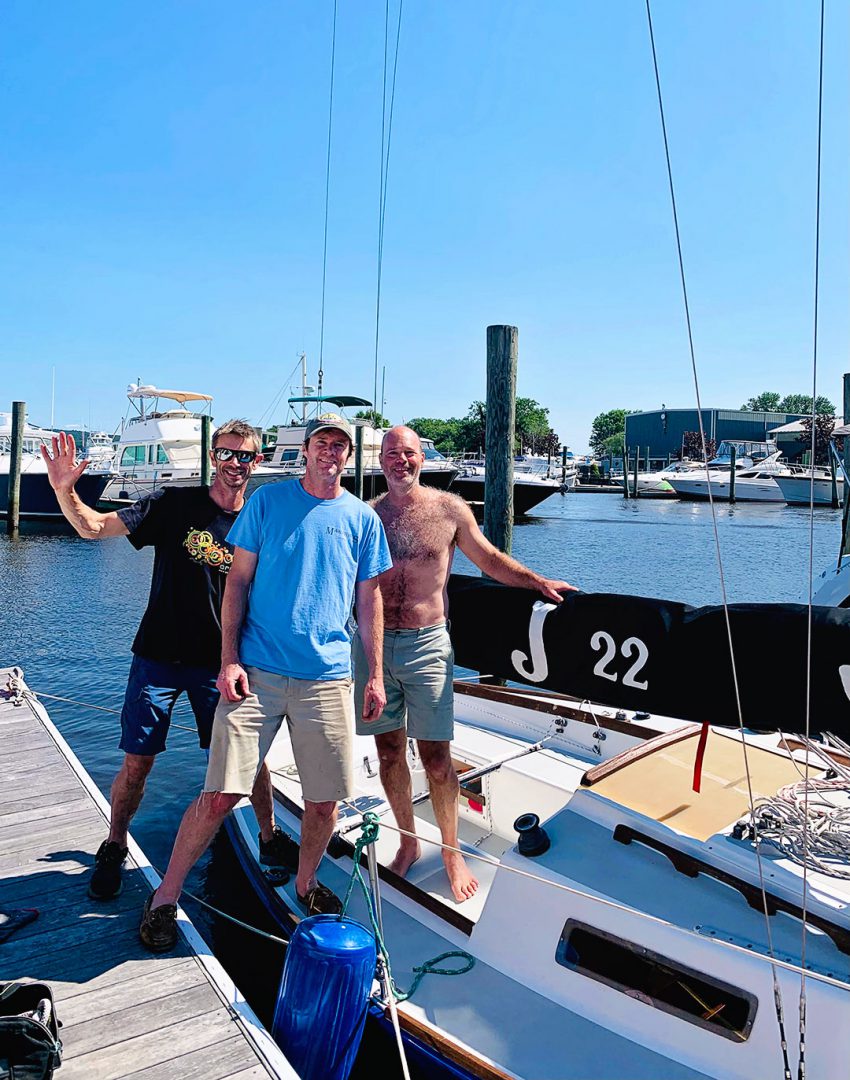