Get the collection of the first 9 issues of Good Old Boat magazine. Available on CD or as a download of PDF files.

PREMIER ISSUE JUNE 1998
The first issue, which came out in June, included an in-depth look at seacocks and through-hulls with an article by Nigel Calder and a companion piece on marine metals by marine architect Dave Gerr. Don Casey had a guest editorial extolling the virtues of good old boats. The issue also focused on the Atomic 4 engine, featured a Cape Dory 30 and her good old sailors, and presented a way to restore your rubrails. We had a centerfold of good old boat photos. And we included a list of sailboat associations and owners’ groups.
SEPTEMBER/OCTOBER 1998
The September/October issue includes a technical look at exhaust systems by Dave Gerr and Jerry Powlas, a supplier feature on Sailrite, a discussion about buying sails through sail brokers, a great article on what to look for when buying an older boat, a feature on an Ericson 35, a “walk down memory lane” with the birth of the Valiant by Sylvia Dabney, an article by Lin Pardey on onboard communication, a review of sailing listservers and newsgroups on the ‘Net, and ruminations by a nautical photographer.
NOVEMBER/DECEMBER 1998
The November/December issue includes a collection of articles on buying, financing, insuring, and upgrading your good old boat and a look at tax considerations for boaters. It has a profile of designer Ted Brewer and a look at fiberglass boats (what can go wrong and how to determine whether an older boat is worth the investment of time and money). It includes a feature on the Niagara 35 and her sailors in Canada’s North Channel and Georgian Bay. A chapter of Roland Barth’s new book, Cruising Rules, pokes fun at macho types who don’t reef. Bill Sandifer shows us how he repaired extensive deck delamination in his Pearson Ariel, and Jerry Powlas talks about the vang/preventer system that works on his C&C. It has a centerfold of good old boat photos by Mary Jane Hayes. Sailrite’s Matt Grant discusses pros and cons of roller furling and hanked-on jibs, and Bob Wood lists names and phone numbers for resources for sailors. This list is available on our supplier page.

JANUARY/FEBRUARY 1999
This issue introduces our “cruising memories” feature which is waiting for contributions from good old sailors, like you. Reese Palley writes about surviving Hurricane Georges. The in-depth technical feature focuses on water and fuel tanks and what to do when they need to be repaired or replaced. Ted Brewer discusses flag etiquette. Ken Textor introduces his Small Boat Journal column with a great piece on dinghies. Sven Donaldson features a couple who sail and love the Blackwatch 19, a great little cruiser by Texan Dave Autry. Winter aboard (in Canada!) is discussed by Larry DeMers, who interviews a couple of year-round liveaboards, and Geoff Parkins interviews Don Moyer of Moyer Marine. Dan Smith profiles the Allied Boat Company’s rise and fall. And Karen Larson discusses life (yes, it’s possible) aboard without an icebox or refrigerator.

MARCH/APRIL 1999
The March/April issue discusses blister repair on a Valient, fuel and water filters, a review of the Albin Vega, a feature on the Baba 30 and her sailors, a look at oars for dinghies, anchoring with two anchors, safe shorepower, how to anodize your boat parts, and much more. This issue introduces a subscriber sweepstakes. In mid-June three paid subscribers were selected to win a handmade model of their boat (first place) or a very nice personalized duffel bag (second and third places). They are featured in our September 1999 issue.

MAY/JUNE 1999
The May/June issue focuses on tuning your standing rigging, appreciating your tiller, buying an affordable boat, restoring a Bristol 27, keeping the motion at anchor under control when there’s surge, and fighting mildew. The Pearson Commander is our feature boat, and the Bristol Channel Cutter is the boat reviewed in this issue. There is a feature on two men who choose to preserve classic sailboats and a small wonders feature on the use of chip logs and lead lines. We also feature the sailor who designed the duffel bags which were part of our giveaway prize drawing for subscribers. This issue is huge — 96 pages — in part because we reran the entire list of sailboat associations and contacts, a list of more than 500 names and growing…

JULY/AUGUST 1999
Our July/August first-year anniversary issue looks at the advantages and disadvantages of aluminum and steel boats, focuses on when and why to buy new sails, talks about what the sailor\’s medical bag should include and how to handle medical emergencies at sea, and includes a short how-to on building a mast. It includes a Cal 20 boat review and a Block Island 40 as the feature boat. Ted Brewer writes about the formulas used by yacht designers, Don Casey gets sentimental about staying aboard during a gentle summer rain, artist Dave Chase tells of his “poor man’s windlass” in comic-book style, Roy Kiesling explains how GPS works, and John Vigor writes about a new $400 dinghy and allows us to reprint a couple of Vigor’s favorites: a ceremony for renaming your boat and what he calls the “Black Box Theory.” We also include a beautiful photo essay and a cruising memory that will bring a smile to your face.

SEPTEMBER/OCTOBER 1999
The September/October issue of Good Old Boat includes articles on climbing the mast, re-doing the standing rigging, adding chafing gear, repairing blisters, replacing ports, and making a valve-spring compressor for use with the Atomic 4. The feature boat is a Nicholson 35, and the review boat is the Contessa 26 (also known as the Taylor 26). Feature articles include love for a special boat dog, a photo essay by Mary Jane Hayes, a look at whether sailboats are really just RVs on the water, and a profile of Joe Palmer who offers parts and customer service for Tartans and other good old boats. And finally, the Pardeys take a look at why we tell “sea-fearing tales” of storms at sea, rather than speaking of the good times we’ve had out there.

NOVEMBER/DECEMBER 1999
The November/December issue of Good Old Boat features the Bayfield boats — particularly the Bayfield 40 — has a review of the Pacific Seacraft Flicka, presents Don Casey on repowering (preparing to replace your diesel engine), and tells the history of the Pearson Yacht Company and birth of fiberglass boats. Our Small Wonders column, which was created in fond memory of Small Boat Journal, discusses moving immovable objects. We’ve also got pressure cooking aboard, replacing your holding tanks, Ted Brewer on helm balance, a lovely picture spread by Scott Kennedy, and something we’ve all asked ourselves — “Why?” by Bill Sandifer on the frustrations boat maintenance can cause. We offer some welcome news for Bristol Yacht sailors, how to make your own pushpit seats, some neat Christmas fiction by Don Launer, the vessel in the fog, and our usual Reflections piece to close out the issue. 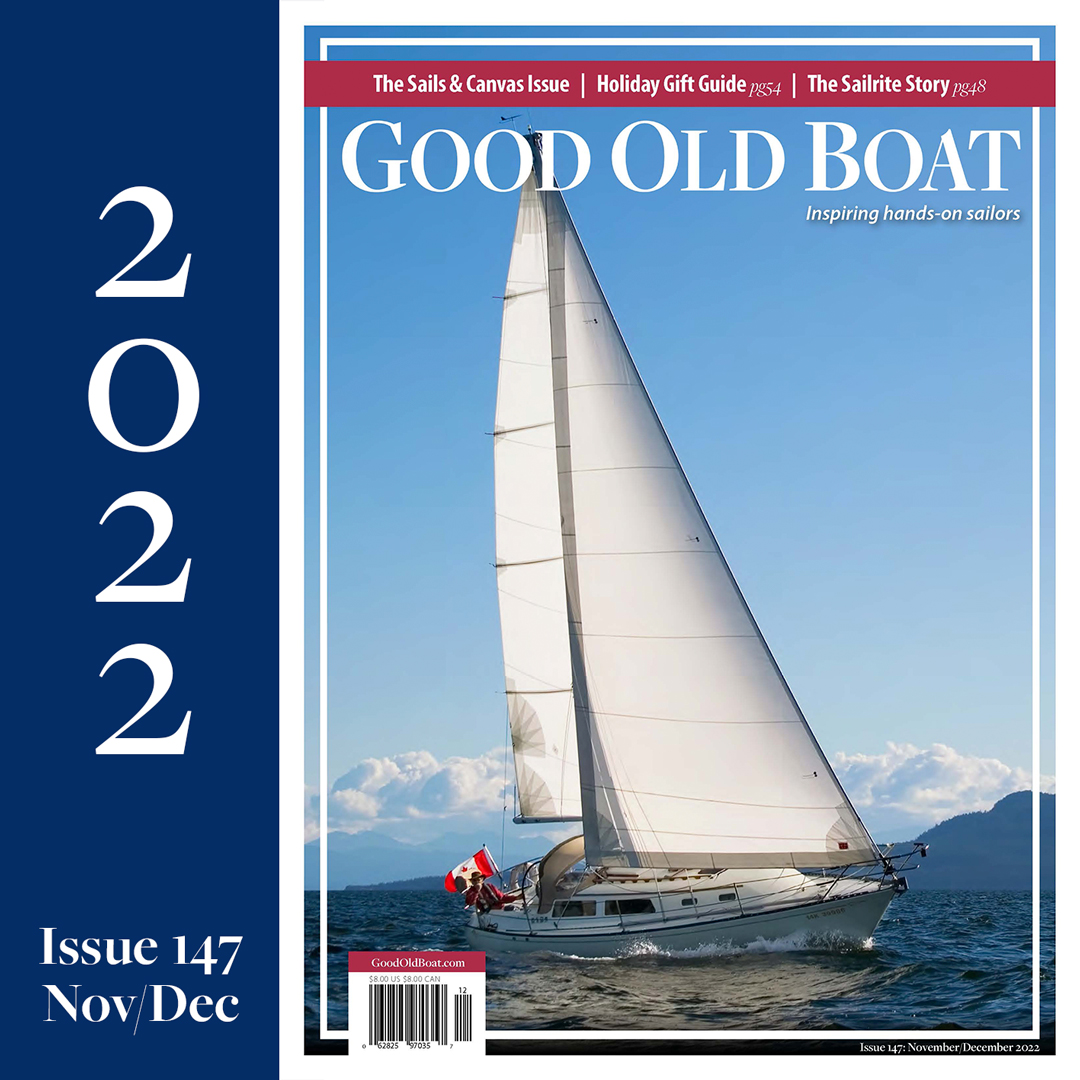